Transoesophageal echocardiography (TOE) plays a pivotal role in the guidance of percutaneous left atrial appendage occlusion (LAAO). Visualisation of the positioning and deployment of the LAAO device is essential for a successful and safe implantation1. Due to the relatively long duration of an LAAO procedure, currently used standard size probes are often not tolerated by patients without the use of general anaesthesia (GA). The use of GA, however, results in the need for an anaesthesiologist, longer procedure times and the risk of anaesthesia-related complications. Therefore, less invasive imaging techniques to guide LAAO are warranted. For paediatric purposes, smaller TOE probes have been developed – the micro probe and the mini probe. Evidence on LAAO guidance with paediatric probes is scarce2.

In this prospective, single-centre registry of consecutive adult patients undergoing LAAO, the feasibility and safety of paediatric probes (Figure 1) to guide the procedure was analysed. The primary effectiveness outcome was adequate closure according to the manufacturer’s instructions for use. The primary safety outcome was the occurrence of probe-related complications.

All procedures were performed by the same experienced operators guided by an expert imaging specialist. Paediatric probe type was chosen at the discretion of the imaging specialist; the first cases were performed with a micro probe (S8-3t; Philips Healthcare, Andover, MA, USA) since the mini probe (S7-3t; Philips Healthcare) was not immediately available. After introduction of the mini probe, better resolution/colour Doppler resulted in preferential selection of the mini probe. Only conscious sedation (intravenous diazepam) and local anaesthetics (lidocaine) were required; however, by design the first cases were performed with GA. A standard set of images was obtained measuring the left atrial appendage (LAA). Combined fluoroscopy imaging and TOE measurements were used for optimal sizing of the LAAO devices1. All patients underwent follow-up imaging with a standard TOE probe using local anaesthetics only in order to verify adequate device positioning.

A total of 86 patients (age 72.6±6.7 years, 65% male) were included (Supplementary Figure 1). In 28 (33%) patients, LAAO was combined with pulmonary vein isolation. CHA2DS2-VASc and HAS-BLED scores were high, 3.8±1.6 and 3.0±1.2 respectively. All baseline characteristics are shown in Supplementary Table 1. Two types of LAAO device were used; 77 (90%) patients received a WATCHMAN™ device (Boston Scientific, Marlborough, MA, USA) and 9 (10%) patients received an AMPLATZER™ Amulet™ (Abbott Vascular, Santa Clara, CA, USA). The procedural characteristics are presented in Supplementary Table 2. In 77 (90%) patients, successful implantation was achieved. Seven of nine failed implantations were due to anatomical reasons (Supplementary Figure 1). One other procedure was complicated by atrial perforation causing tamponade, which required successful surgical intervention. However, this patient died within 48 hours because of intractable haemodynamic shock. The last procedure was interrupted because of LAA thrombus. Another patient developed thrombus on the sheath during the procedure. After additional administration of heparin, the thrombus resolved and the procedure could be completed.

The micro and mini probes were used in 42 (49%) and 44 (51%) patients, respectively. The insertion of both probes was successful in all cases. No procedure was prematurely terminated because of discomfort of the patient, and no conversion to GA was needed in any patient. One patient had a minor oropharyngeal bleeding during the procedure, managed conservatively. In all cases, image quality was sufficient to complete the procedure, and switching between probes was not necessary. No traumatic injuries to the oropharyngeal space or the upper gastrointestinal tract were reported. One patient experienced mild discomfort of the oesophagus during hospitalisation. Complete closure was achieved in 60 (78%) patients; minimal residual flow was present in 17 (22%) patients. All echocardiographic findings are described in Supplementary Table 3. No substantial differences between the paediatric probes were found.

Follow-up imaging was performed in 72 (95%) patients. Complete closure was observed in 51 (72%) patients, while minimal residual flow was seen in 18 (25%) patients. Significant residual flow was observed in only two patients. One WATCHMAN device embolisation to the abdominal aorta was observed during follow-up TOE, resulting in adequate closure in 69 (96%) patients during follow-up. Differences between baseline and follow-up peri-device leakage are illustrated in Figure 2; most shifts did not lead to significant residual flow. In 63% of all patients there was no change in peri-device leak, while 26% of the patients showed an increase and 11% showed a decrease. An average increase of 0.37 mm peri-device leakage was calculated between LAAO and follow-up imaging. One patient showed device-related thrombus while still using anticoagulation, but no evidence of thromboembolic complications was present. 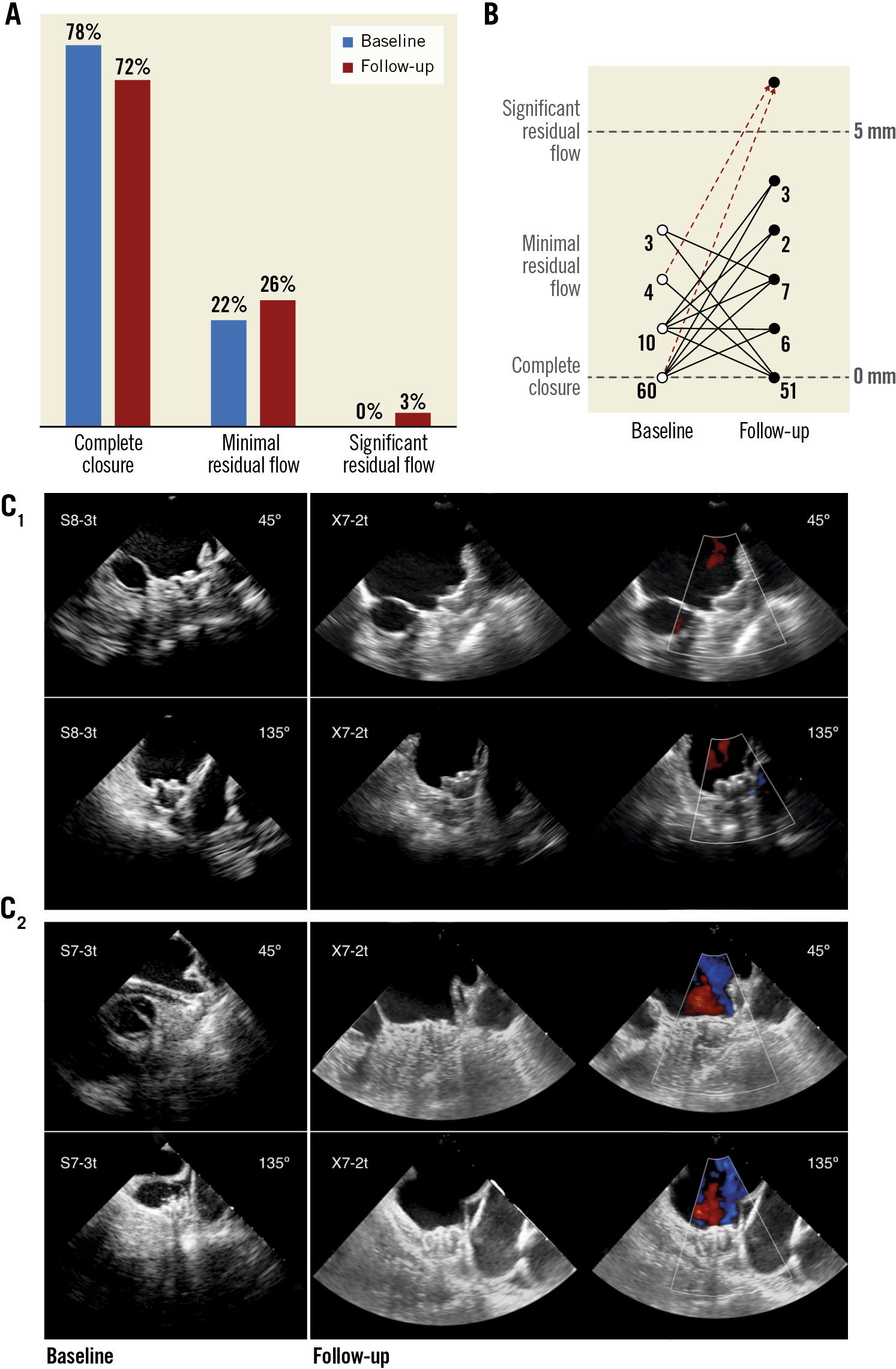 Our study is the largest series to date describing the use of paediatric probes in adults for guiding LAAO, with the highest number of procedures performed without GA and with closure rates during follow-up imaging available. The study demonstrated that the guidance of LAAO with paediatric probes can be performed without probe-related complications, and without the need to convert to GA in any patient. Adequate closure was observed in all patients during the procedure and in 96% of all patients during follow-up imaging.

In our study, successful LAAO was observed in 90% of all patients, which is somewhat lower compared to recently published observational studies (e.g., EWOLUTION; success rate 98.5%)3. A possible explanation is that in the current study population no imaging was performed prior to LAAO to eliminate cases with unsuitable anatomy. Of note, none of the failed procedures was due to inadequate visualisation during the procedure, as indicated by the operating cardiologist and imaging cardiologist.

The findings in the present study are consistent with results from previous reports on the feasibility of paediatric probes to guide transcatheter interventions in adults. Recently Barreiro-Perez et al reported on 50 LAAOs under micro probe guidance without GA. Good tolerance of the micro probe and no probe-related complications were presented, similar to our results2.

The performance of the adult micro and mini probes was not compared within the same patients. Although our study is the largest of its kind so far, the small sample size limits the power of the analysis. All procedures were guided by the same experienced operators and experienced imaging cardiologist, which may underestimate the potential differences in procedure outcomes with multiple operators and varying levels of experience.

The use of paediatric probes in the guidance for LAAO in adults is a safe and effective alternative avoiding the need for GA. Further evaluation and comparison with other imaging modalities should be performed. The image quality of paediatric probes did not influence adequate closure results compared to historical outcome data with adult probes.

This study was supported by an educational grant from Boston Scientific.

L. Boersma is a consultant for Boston Scientific and a proctor for Abbott. M. Swaans reports proctoring fees for training/educational services to the Department of Cardiology from Boston Scientific, and personal fees from Abbott Vascular, Boston Scientific, Philips Healthcare and Bioventrix Inc. outside the submitted work. L. Wintgens reports grants from ZonMw, during the conduct of this study. The other authors have no conflicts of interest to declare.