Background: The Cardioband tricuspid valve reconstruction system is a size-adjustable tricuspid reconstruction device for interventional treatment of tricuspid regurgitation (TR). Contraction of the device after successful implantation can be associated with an acute deformation of the right coronary artery (RCA).

Aims: The aim of this study was to provide data on the persistence and clinical significance of acute RCA deformation following Cardioband implant procedures.

Methods: Data from all patients with intraprocedural RCA deformation during Cardioband implantation were collected from four centres between October 2018 and January 2020. Control angiographies were performed in all of these patients before discharge.

Results: RCA deformation occurred in 14 out of 51 patients. Follow-up coronary angiography showed a complete resolution of deformation in all cases while patients remained clinically asymptomatic and had an uneventful post-interventional course. Intraprocedural coronary stent implantation was performed in two of the earlier cases according to the personal assessment of the implanters.

Conclusions: RCA deformation is relatively frequent following interventional tricuspid annuloplasty but appears to be completely reversible in the absence of flow impairment or vascular damage. Based on our early experience watchful waiting is the most appropriate strategy to avoid unnecessary coronary interventions.

There is an urgent need for catheter-based therapies for tricuspid regurgitation, as pharmaceutical therapy becomes ineffective in advanced disease stages and surgery remains associated with high mortality rates1,2.

The Cardioband™ transcatheter system (Edwards Lifesciences, Irvine, CA, USA), by using partial annuloplasty, closely mimics the most efficient surgical technique for tricuspid repair. Six-month outcomes in the TRI-REPAIR study have shown promising results, with persisting tricuspid regurgitation (TR) reduction and significantly improved exercise capacity and quality of life3. The device is secured to the tricuspid annulus with multiple screw anchors and can be contracted at the end of the procedure to improve leaflet coaptation by downsizing the tricuspid annulus. It targets the anterolateral part of the tricuspid annulus which is in close proximity to the right coronary artery (RCA). Consequently, RCA deformation resulting from the reduction of the annulus perimeter has been reported previously4. However, uncertainty exists about the clinical implications of this phenomenon.

We herein report the angiographic and clinical short-term follow-up of 14 patients from four centres, who underwent interventional tricuspid valve repair with the Cardioband tricuspid system and who developed intraprocedural RCA deformation after contraction of the tricuspid annulus.

Data and fluoroscopic footage of all patients with acute RCA deformation who underwent transcatheter tricuspid repair with the Cardioband tricuspid system were prospectively collected at four different centres in Germany between October 2018 and January 2020. Data collection was approved by local ethics committees and written informed consent was obtained from every patient.

The Cardioband implant is advanced to the tricuspid valve via a transfemoral venous approach. The implantation of up to 17 anchors is performed under continuous echocardiographic and fluoroscopic guidance beginning at the anteroseptal commissure to the posterior annulus.

Echocardiographic guidance assists in placing the anchors between the leaflet hinge point and the RCA. Fluoroscopic guidance is accomplished by inserting a wire into the RCA which is located close to the tricuspid annulus, to allow optimal visibility of anchor deployment. Close proximity to the RCA is a limiting factor for optimal positioning. The anchors can be completely repositioned and retrieved prior to deployment. After verifying optimal positioning of the anchors, the implant is contracted via the SAT under beating heart conditions, thereby reducing annulus size and reducing TR as much as possible4,5,6.

Patient characteristics and data from computed tomography (CT) for each patient with post-procedural acute RCA deformation are given in Table 1 and Table 2. Mean age of the patients was 77±8 years and 11 (77%) of them were female with a mean EuroSCORE II of 8.5%. The mean ejection fraction was normal (>55%) and no other clinically relevant or untreated valvular/left heart disease was detected. Five patients presented with coronary artery disease. Percutaneous coronary intervention of the RCA was not performed in any patient. One patient had a history of coronary artery bypass grafting of the RCA. 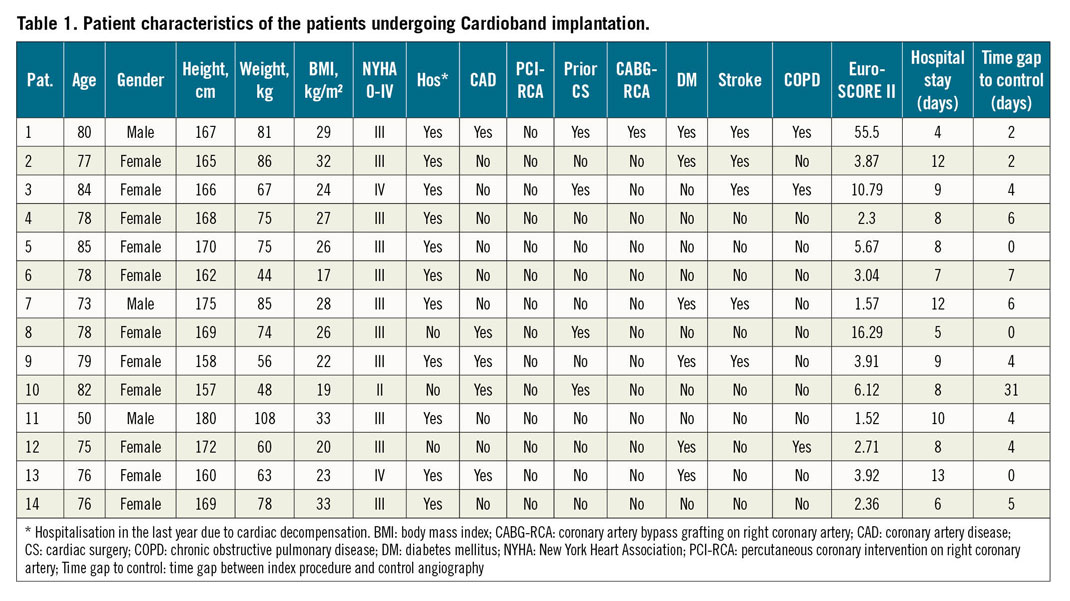 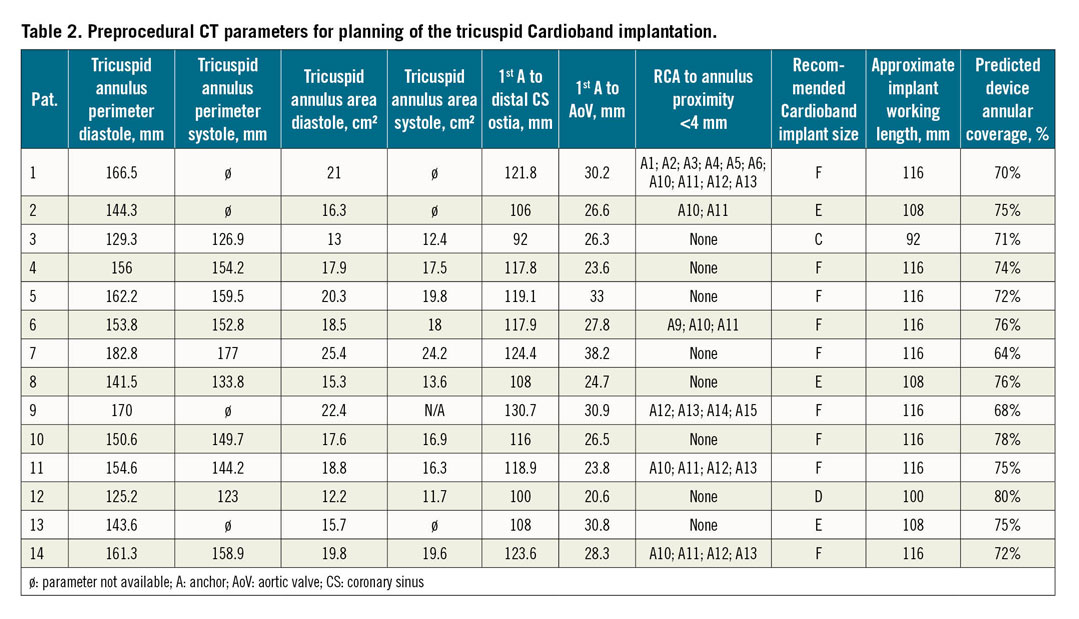 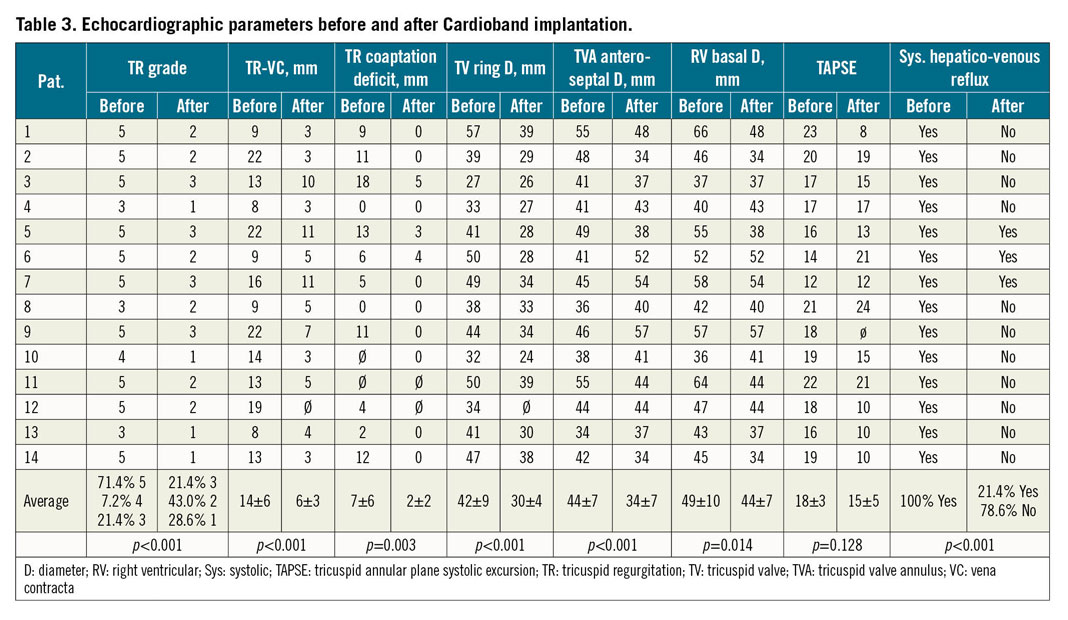 Fourteen patients who underwent tricuspid reconstruction with the Cardioband tricuspid system showed an acute RCA deformation after contraction of the implant.

In 12 cases of RCA deformation, although angiographically severe (at least 80% stenosis by visual estimation), no flow impairment or signs of dissection, perforation, occlusion or any other vessel damage could be observed. In addition, patients remained haemodynamically stable and did not show signs of myocardial infarction in the ECG. Mean creatine kinase values were 71.58±32.23 U/l before and 90.55±68.53 U/l after Cardioband implantation, confirming the absence of significant myocardial damage. For this reason, a strategy of watchful waiting combined with a follow-up angiography was chosen. Control angiography was performed after a mean of 5.36±7.73 days after Cardioband implantation, revealing complete reversal of the RCA distortion caused by the Cardioband implant (Figure 1, Figure 2, Moving image 1-Moving image 14). In two earlier cases (patient 5 and patient 13), the operator decided in favour of stenting according to his personal assessment. Also, none of these cases showed signs of actual vascular injury. 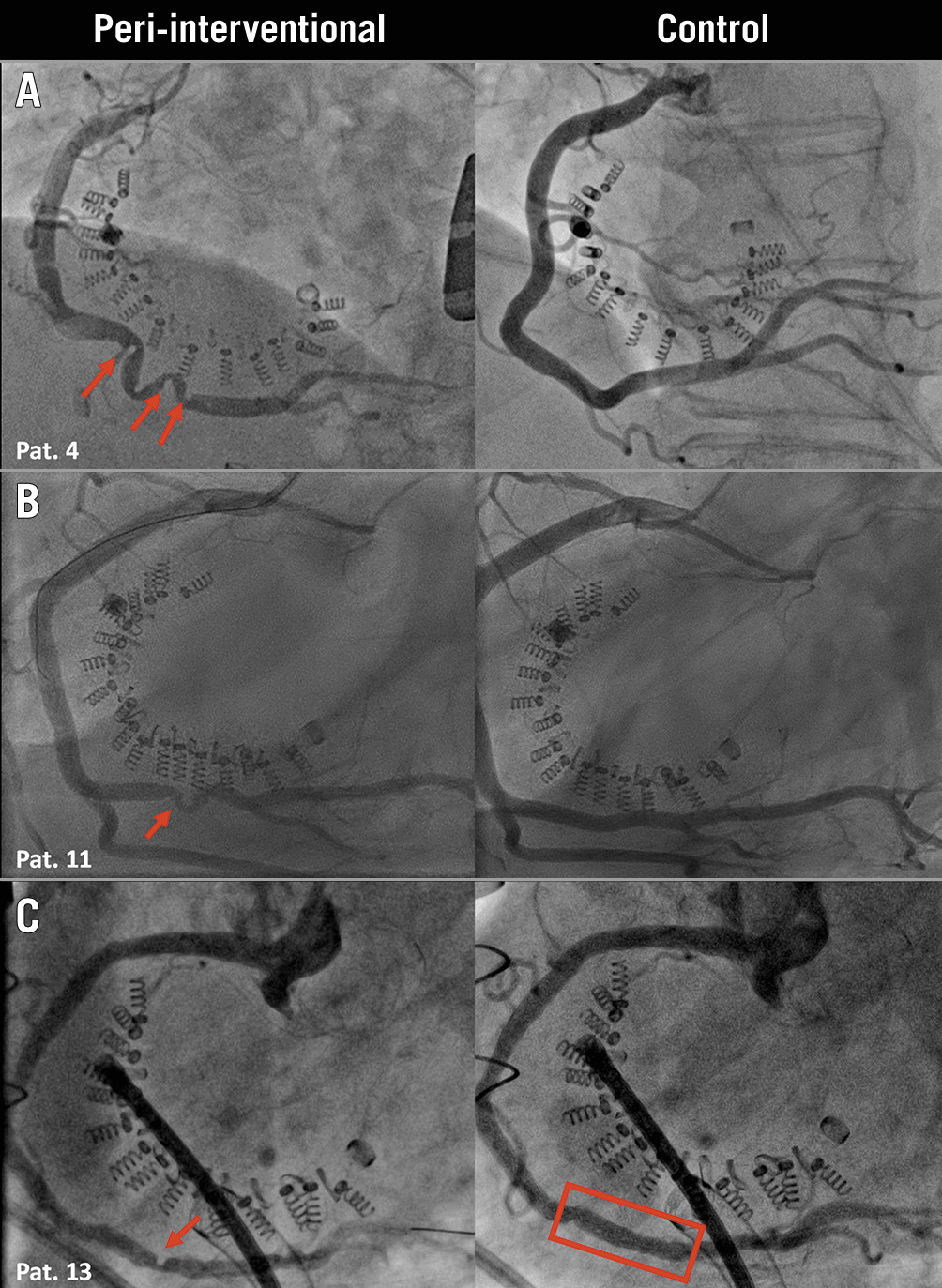 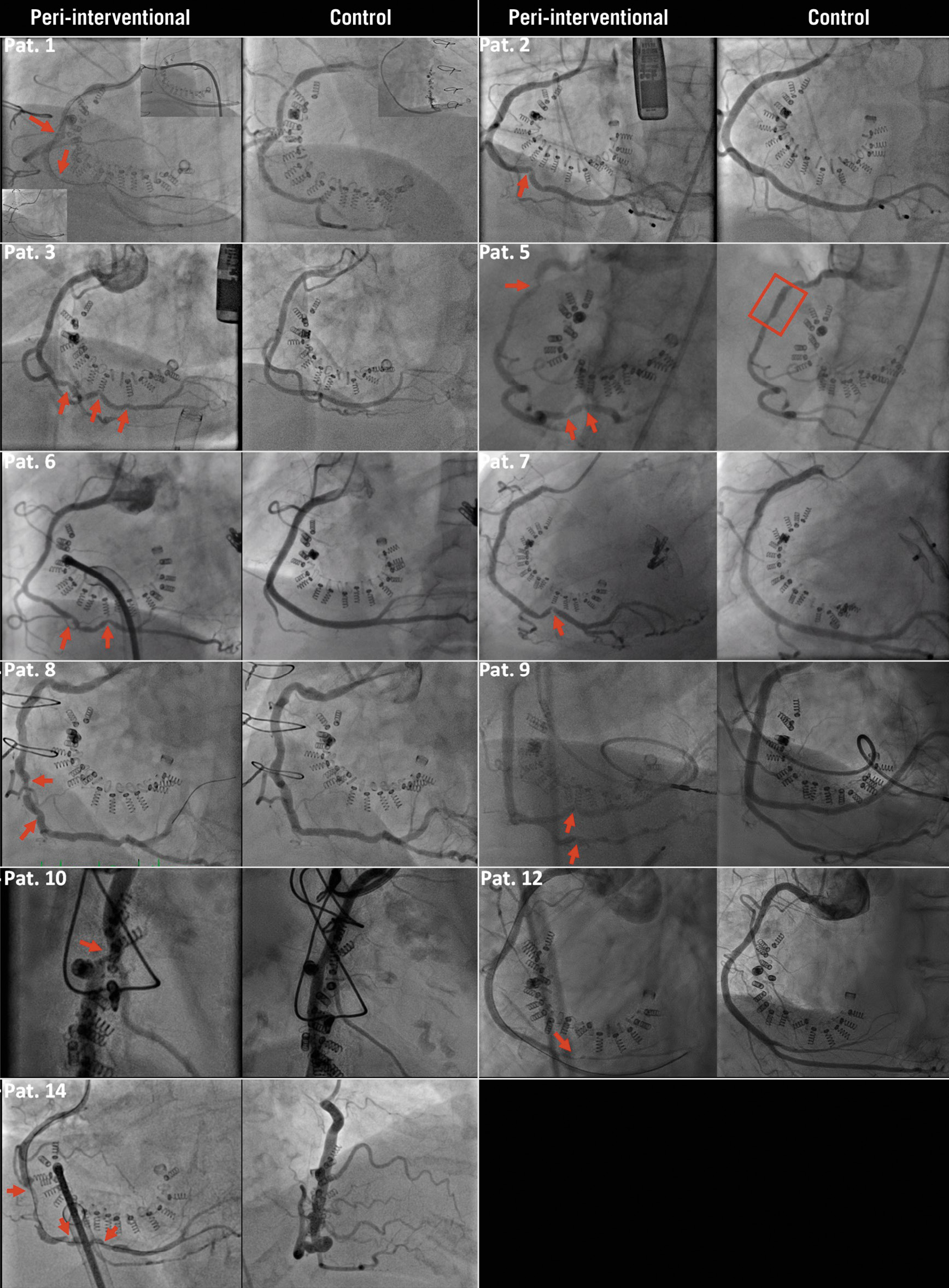 Figure 2. Further angiographies revealing complete recovery of RCA deformation. Uneventful stent implantation was performed in Patient 5 according to the interventionalist’s personal assessment. The patients were not arranged in chronological order.

All patients with RCA deformation experienced an uneventful post-procedural course. The mean hospital stay of the patients was 8.5±2.6 (median 8) days. In one case, unrelated to the RCA, at approximately the 15th anchor, the end of the coronary sinus was already reached. Two additional anchors were deployed; however, after the last anchor deployment, the patient’s heart rate dropped and an atrioventricular block was visible in the ECG. Finally, a permanent pacemaker was implanted on the second post-interventional day. No other event included in the Mitral Valve Academic Research Consortium (MVARC) criteria was observed during a 30-day follow-up in any patient with RCA deformation. Within the remaining 37 patients without RCA deformation, one patient presented a combined endpoint consisting of death, stroke or myocardial infarction. The patient suffered from laryngeal injury as a consequence of general anaesthesia and periprocedural transoesophageal echocardiography. The patient had to remain on a ventilator after the procedure and was transferred to the intensive care unit. Later, the patient first developed ventilator-associated pneumonia followed by enteritis that culminated in a toxic megacolon. He therefore had to undergo abdominal surgery and shortly thereafter died of septic shock.

CT data are essential for procedural planning for interventional tricuspid repair with the Cardioband tricuspid system, reviewing its feasibility, selecting the device size and detecting the first/last anchor position to avoid injuries to the aorta/coronary sinus. In particular, the predefined course of the RCA and the proximity to the recommended anchor placement for optimal Cardioband implantation are of tremendous importance for the interventionalist in order to avoid unnecessary RCA injury, occlusion or perforation9,10.

Deformation of the RCA, however, is not uncommon following perimeter shortening of the tricuspid annulus during transcatheter tricuspid annuloplasty. Herein we describe the angiographic and clinical short-term follow-up of 14 cases with deformation of the RCA. Our observations suggest an uneventful clinical short-term course with complete angiographic resolution even in cases with pronounced RCA deformation.

In the TRI-REPAIR study, the Cardioband tricuspid system for interventional tricuspid valve repair has already been shown to be feasible, safe and effective in midterm follow-up, with promising results with regard to increased quality of life, exercise capacity and improved NYHA class in a limited number of patients3.

Due to the proximity of the tricuspid annulus and the RCA, injury of the RCA has already been reported as a potential complication in the context of surgical tricuspid repair11. However, the literature only reports cases where vessel injury became apparent because of symptoms or a complicated clinical course, while systematic angiographic follow-up has not been performed in surgical patients. Therefore, the alterations described herein would have remained unnoticed if angiography of the RCA had not been an inherent part of the implantation procedure. Clearly, the observed alterations pose a relevant problem for the implanting team, since it has to be decided whether coronary intervention should be performed or not. In this regard, our experience suggests that RCA deformation following size adjustment of the annuloplasty band does not require immediate coronary stenting. Instead, intensified clinical monitoring appears to be an appropriate strategy, and complete angiographic resolution (even in cases with severe deformation as reported herein) increases the likelihood that, with increasing procedural experience, it may be safe to omit follow-up angiography.

Importantly, these cases clearly have to be distinguished from cases where vessel injury in the form of perforation, dissection or occlusion occurs, e.g., due to implantation of the screw anchors, which has been described in the literature and which is beyond the scope of the current manuscript3.

In this context, it has of course to be considered that contraction of the annuloplasty band may cause secondary vessel damage by unfavourable shifting of an anchor. However, in our collective experience, to date, such a case has not been observed. Nevertheless, in two earlier cases of our series stent implantation was performed (Moving image 5, Moving image 13). In none of these cases were clear signs of vascular damage in the above sense apparent, and most likely a conservative strategy would have been chosen with the experience available today. Even so, thorough evaluation is clearly warranted in every case to differentiate between acute vessel deformation and injury.

This study reflects a small cohort of patients who underwent Cardioband implantation. The patients were subject to only a short follow-up. Therefore, more data and longer experience are needed to assess the impact of RCA deformation on patient outcome adequately.

Our data suggest that intraprocedural acute RCA deformation following contraction of the Cardioband for percutaneous tricuspid annuloplasty is a transient phenomenon with angiographically complete resolution after some days.

V. Rudolph, R. Pfister, C. Jacobshagen and M. Arnold have received research grants and speaker honoraria from Edwards Lifesciences Services (Unterschleißheim, Germany). The other authors have no conflicts of interest to declare.