Transcatheter aortic valve replacement (TAVR) in patients with raphe-type bicuspid aortic valve (BAV) stenosis poses several anatomical and technical challenges that could be associated with suboptimal procedural and clinical outcomes1. Despite the introduction of new-generation transcatheter heart valves (THV), device success is mainly affected by a relevant incidence of significant paravalvular leak (PVL) that is 3-fold higher in patients with BAV anatomy undergoing TAVR with self-expanding prostheses, as compared to those with tricuspid aortic valve anatomy2. Furthermore, optimal prosthesis sizing in BAV anatomy is controversial: although the concept of supra-annular sizing, instead of virtual basal ring (VBR) annular sizing, has been proposed in this setting to account for the tapered configuration of the THV landing zone, there is a lack of agreement across the operators about a specific supra-annular method of sizing34. These issues require tailored solutions as indications for TAVR expand towards younger patients, at lower surgical risk, in whom BAV prevalence is expected to be higher5.

Recent multicentre European experience with the ACURATE neo THV (Boston Scientific) sized according to the VBR perimeter showed a high rate of post-procedural moderate PVL (7.4%) in the BAV cohort6. The ACURATE neo2 THV (Boston Scientific) features a dedicated sealing skirt, specifically designed to minimise PVL incidence (Figure 1A). The impact of combining this technological improvement with the innovative  level of implantation at the raphe (LIRA) supra-annular sizing method (Figure 1B-Figure 1E) on procedural outcomes in raphe-type BAV patients undergoing TAVR with this self-expanding device is unknown. Recent evidence has shown that THV anchoring in raphe-type BAV anatomy occurs at the level of the raphe’s maximum protrusion, which can be identified as the LIRA plane on preprocedural cardiac computed tomography (CT)7. Supra-annular THV sizing at the LIRA plane, known as the LIRA method, has been shown to be safe and effective in a small cohort of 20 raphe-type BAV patients undergoing TAVR with different THV platforms, resulting in extremely low rates of PVL8.

This is the first report exploring procedural outcomes of TAVR with the new ACURATE neo2 THV in raphe-type BAV anatomy according to the LIRA method.

Between February and August 2021, 10 patients with raphe-type BAV anatomy underwent TAVR at our institution and were prospectively included in this study. Patients were scheduled for TAVR after discussion by the Heart Team, as indicated by current guideline recommendations. All patients underwent transthoracic echocardiography and an echocardiography (ECG)-gated cardiac CT scan before TAVR. All baseline CT scans were analysed using OsiriX software version 9 (Pixmeo). The aortic valve anatomy was assessed, and BAV type was defined according to the Sievers classification. The aortic valve calcium score was calculated using semi-automatic dedicated software (IntelliSpace Portal 8.0; Philips Medical Systems). The VBR was identified as the plane linking the hinge points of the aortic leaflets, and measurements of the diameter, the perimeter and the perimeter-derived diameter were obtained at this level. The LIRA plane was identified as the plane of the raphe’s maximum protrusion along the aortic root (representing the expected level of prosthesis anchoring), and measurements of the perimeter and the perimeter-derived diameter were obtained at this level. Prosthesis sizing was performed according to the supra-annular LIRA method, as previously described (Figure 1B-Figure 1E)8. The individual ratio between the labelled THV (according to annular sizing) and the perimeter-derived diameter at the LIRA plane, and the individual ratio between the implanted THV (according to the LIRA method) and the perimeter-derived diameter at the VBR plane were measured. The procedure was carried out with the lower edge of the THV radiopaque marker positioned at the level of the VBR, while aiming to anchor the upper crown above the raphe. All patients underwent a 30-day follow-up visit with transthoracic echocardiography. The primary outcome of the study was device success at 30-day follow-up, as defined by the Valve Academic Research Consortium-3 (VARC-3) criteria9. Informed consent was obtained from each patient and the study was conducted in accordance with the Declaration of Helsinki.

Continuous variables were described as means and standard deviations (SD) or as medians and interquartile ranges (IQR), as appropriate, and categorical variables as numbers and percentages. Normality was checked using the Shapiro-Wilk test. The perimeter-derived diameter measured according to the LIRA method was compared to that measured according to the VBR sizing method using a paired t-test. The comparison of the THV sizes selected according to each sizing modality was performed using the Wilcoxon signed-rank test. Statistical significance was considered for a 2-tailed p-value of ≤0.05. The statistical analyses were performed using SPSS version 22.0 (IBM).

Procedural characteristics, in-hospital and 30-day outcomes are reported in Table 2. All TAVR procedures were performed under conscious sedation through a femoral route. Predilatation was performed in all cases with a median balloon size of 20 (20-23) mm. ACURATE neo2 THV implantation was performed under rapid pacing. Post-dilatation was not required in any case (Figure 1F-Figure 1H). Overall, 50% of patients received an ACURATE neo2 THV. No procedural complications occurred and no permanent pacemaker (PPM) was required. All patients were asymptomatic at discharge and in good clinical condition. Device success at 30-day follow-up, defined according to VARC-3 criteria, was achieved in 100% of cases, with freedom from mortality, no mean gradient ≥20 mmHg, and no moderate or severe PVL. 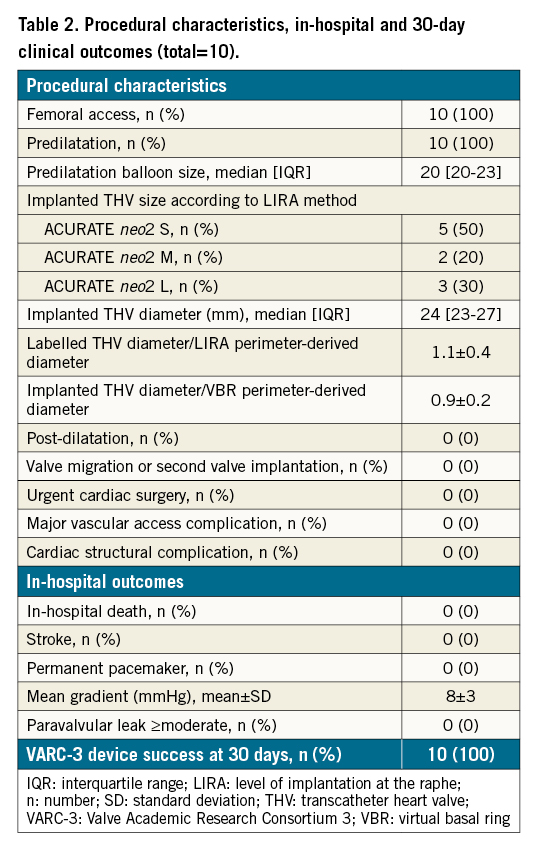 This prospective study demonstrated favourable clinical outcomes in raphe-type BAV patients undergoing TAVR with the novel self-expanding ACURATE neo2 THV using the supra-annular LIRA method for sizing. Despite recent technological iterations, the complex interplay between THV and aortic root anatomy poses specific challenges and affects the outcomes of TAVR in raphe-type BAV anatomy. TAVR using annular sizing in raphe-type BAV anatomy frequently leads to THV underexpansion, highlighting the presence of points of constraint throughout the aortic root, that are mainly represented by the raphe itself57. This underexpansion could potentially lead to PVL, hamper THV durability, affect leaflet coaptation or promote thrombosis. Therefore, it appears to be of utmost importance to identify a tailored sizing method in raphe-type BAV that allows for the obtainment of safe anchoring and maximum expansion, while avoiding excessive oversizing and the subsequently increased risk of THV frame constriction with leaflet distortion. In this context, the supra-annular LIRA method, taking into account the presence of the raphe, could help in selecting an appropriate THV sizing that could allow stable anchoring and sealing, as well as adequate gradients, while reducing the stress on the stent frame. It is noteworthy that specific platform characteristics, such as sealing skirts and radial force, play a relevant role in the interaction between the THV and the surrounding structures and should be also taken into account. The ACURATE neo2 THV features a low radial force as compared to other self-expanding platforms, therefore, generating concerns regarding its use in the context of BAV anatomy with calcified raphe, due to the perceived risk of stent frame underexpansion10. However, adequate routine predilatation, by modifying the stiffness of the surrounding anatomy, could enhance the THV expansion and apposition, potentially contributing to optimal results in terms of PVL and residual gradient after TAVR observed in this series.

The main limitations of this study are represented by the small sample size and by the absence of a control group for outcome comparison. Further limitations include the absence of both an imaging core laboratory and a post-procedural CT scan. Finally, as calcium burden is a relevant determinant of the final THV expansion, it should be quantified and eventually integrated into the sizing method in the future.

This initial exploration suggests that in raphe-type BAV patients undergoing TAVR, the use of a novel self-expanding supra-annular THV with a dedicated sealing skirt, in combination with prosthesis sizing according to the supra-annular LIRA method, is associated with favourable clinical outcomes, in particular, with the absence of moderate or severe PVL. Further prospective studies are warranted to test this hypothesis in a larger cohort of patients.

M. Montorfano and F. Russo received consultancy fees from Boston Scientific. The other authors have no conflicts of interest to declare. 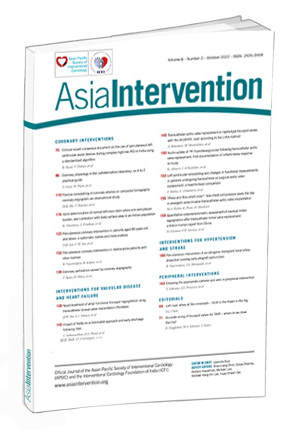