Aims: Antegrade femoral puncture is frequently performed in endovascular therapy, with haemostasis achieved through manual compression. The aim of this paper is to report the novel method of achieving haemostasis using the Angio-Seal device for antegrade punctures of the femoral artery.

Methods and results: Between September 2017 and March 2018, a total of 50 consecutive patients who underwent endovascular therapies (EVT) through the common femoral artery with an antegrade puncture using a 6 Fr introducer sheath were retrospectively analysed. After EVT, all patients received a 6 Fr Angio-Seal STS Plus Vascular Closure Device. All procedures were performed using the following new technique. First, we inserted the Angio-Seal guidewire from the inserted EVT sheath into the artery. Second, we removed the EVT sheath and inserted the Angio-Seal sheath and then removed the dilator and Angio-Seal guidewire. Under angiography using an 18 G needle sheath, we pulled back the Angio-Seal sheath as near to the insertion site of the vessel as possible. Finally, a collagen sponge and plug were inserted as per the standard technique. In all patients, the Angio-Seal was successfully deployed, and haemostasis was achieved within several minutes. No major complications occurred.

Conclusions: We demonstrated the feasibility and efficacy of achieving haemostasis using the Angio-Seal device in an antegrade femoral puncture using the novel method.

The transfemoral approach is frequently used in endovascular therapies (EVT) such as percutaneous coronary intervention (PCI) and percutaneous peripheral intervention. Puncture site complications following transfemoral EVT include bleeding, haematoma, vessel occlusion and pseudoaneurysm formation, and remain a significant cause of patient morbidity in the perioperative period12. The traditional method of achieving haemostasis following EVT has been manual compression. Vascular closure devices have become available recently34. One of those devices, the Angio-Seal (Terumo) was introduced as a vascular closure device in Europe in 1994. It achieves haemostasis by compressing the puncture site between an anchor and a collagen plug56. In general, Angio-Seal use has been via retrograde puncture of the common femoral artery (CFA). However, antegrade punctures in transfemoral EVT are now frequently performed, especially in EVT for peripheral artery disease (PAD). The femoral puncture site in an antegrade puncture tends to be more proximal than in a retrograde puncture, such as in EVT for proximal superficial femoral artery (SFA) lesions. Hence, the risk of bleeding complications can be high because manual compression is difficult. Regardless, haemostasis is achieved by manual compression in most cases. The prevention of puncture site complications remains an important issue, and a more reliable haemostatic method is needed for daily clinical practice. In this paper, we discuss the modified interventional method of using a common antegrade femoral artery access for closure using an Angio-Seal device.

Between September 2017 and March 2018, we retrospectively analysed consecutive patients who underwent EVT with an antegrade puncture to the common femoral artery (CFA) using a 6 Fr introducer sheath. Patients with significant disease of the CFA were excluded at the operator’s discretion but 50 patients were included in this study. All patients suffered either from claudication or critical lower limb ischaemia due to PAD. Some of the patients were heparinised with 1,000-3,000 units intravenously. After EVT, all patients received a 6 Fr Angio-Seal vascular closure device. All procedures were performed with our new technique, described below. Patients remained in place for the following 3 hours. Clinical data were collected during hospital visits or by telephone contact at 6-month intervals. The relevant review boards in each institute approved the study protocol. We obtained written informed consent from each patient for data collection and analysis, in accordance with the Declaration of Helsinki.

The primary endpoint in this study was major adverse arterial events, defined as a composite of major bleeding, vessel occlusion and pseudoaneurysm formation. Major bleeding was defined as the occurrence of Bleeding Academic Research Consortium type 3 or 5 bleeding7. The patients were monitored during the follow-up period. Evaluation was focused on local findings including paresthaesia, pain, subcutaneous haematoma and pulse status of the femoral, popliteal, dorsal and posterior tibial arteries of the puncture site 24 hours, 6 weeks and 3 months after EVT.

The entire procedural detail of our novel method is basically the same as the standard technique. The major difference is that angiographic guidance is used to place the Angio-Seal outer sheath in the best position for the appropriate placement of the anchor (Figure 1A). 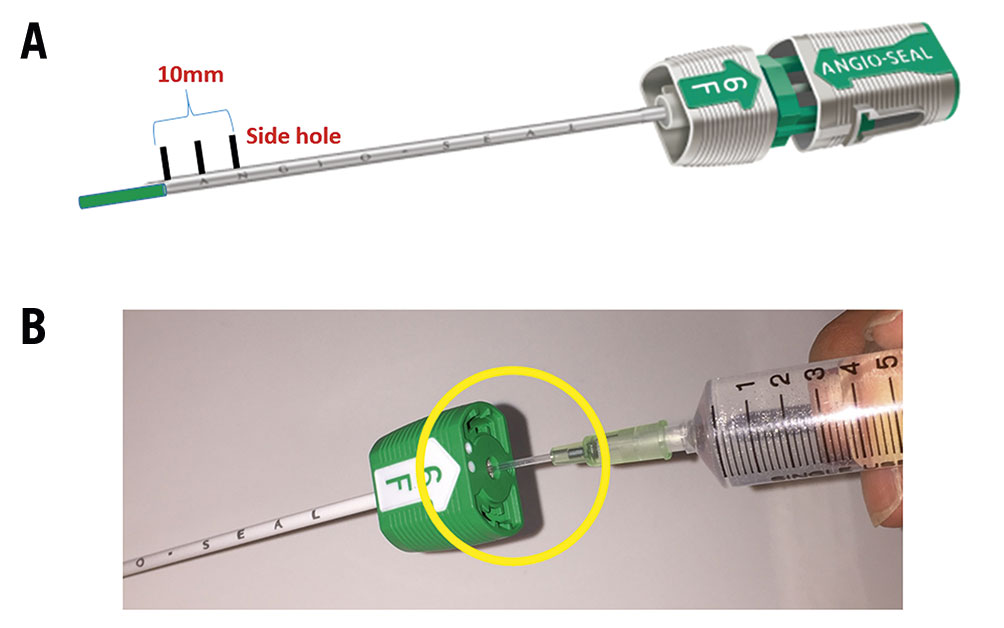 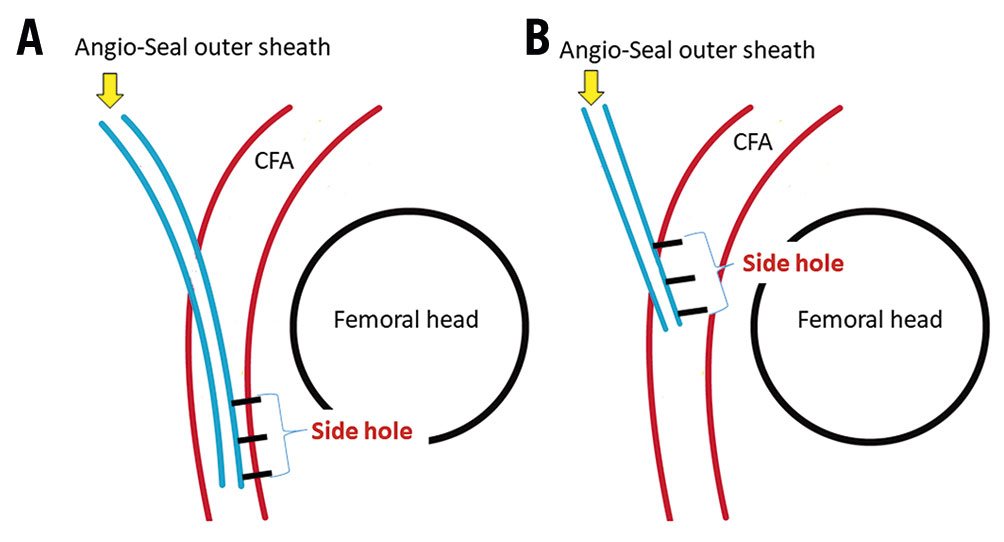 Clinical and angiographic baseline characteristics are summarised in Table 1. In all patients, the Angio-Seal device was successfully deployed, and haemostasis was achieved within several minutes. The pouch enclosed the collagen plug, the collagen knot was palpable in all patients and no major complications occurred. Within the 24 hours following intervention, minor complications included transient oozing bleeding and mild pain. There was local groin pain around the puncture site in 4 of the 50 patients (8%) and a small subcutaneous haematoma in 3 patients (6%). At 3 months, no complications remained. A pulse deficit in the femoral, popliteal, dorsal and posterior tibial arteries of the puncture site was not observed in any of the patients at any time. Additionally, 4 patients had the CFA puncture within 90 days following index EVT with no complications occurring in these patients. 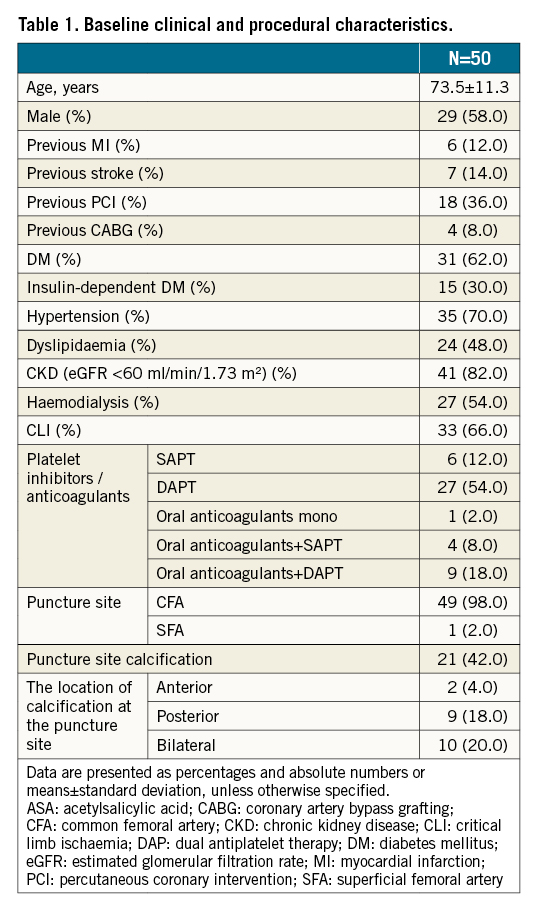 We suggest that this modified interventional method using the Angio-Seal device increases the feasibility and efficacy of common antegrade femoral artery access closure.

Figure 3. Representative image of Angio-Seal device failure. A. Inappropriate placement of anchor. A collagen sponge is trapped at the calcified site of the artery. B. Insufficient extrusion of anchor. The Angio-Seal outer sheath is incompletely inserted.

In summary, we performed angiography using our MAOH technique, as in Moving image 1. The MAOH technique differentiates itself from the standard technique by allowing the outer sheath to be placed in the optimal position. In the standard method of angiography, the position of the outer sheath is often too deep or too shallow. The outer sheath position is very important for successful haemostasis with the Angio-Seal because inappropriate positioning of the outer sheath can lead to the failure of haemostasis. Finally, even with this novel technique of using the Angio-Seal device, access site outcomes may not be superior to manual compression alone because there is no comparison group using manual compression in this study. We want to emphasise some advantages mentioned above.

This study is limited by the small number of patients included and by the fact that it is a retrospective study; therefore, selection bias cannot be ruled out. A larger prospective database is needed to confirm these findings and compare effectiveness and safety among different closure devices.

We suggest that using the MAOH technique with the Angio-Seal device increases the feasibility and efficacy of the modified interventional method of antegrade CFA access closure.