The commonly used left atrial appendage (LAA) occlusion (LAAO) devices, the WATCHMAN™ (Boston Scientific, Marlborough, MA, USA) and the AMPLATZER™ Amulet™ (Abbott Vascular, Santa Clara, CA, USA), both rely on oversizing for stabilisation. Therefore, occluding large LAA (ostium ≥31 mm for the WATCHMAN or landing zone ≥31 mm for the AMPLATZER Amulet) is not possible. The LAmbre™ device (Lifetech Scientific [Shenzhen] Co., Ltd. Shenzhen, China) has an additional stabilisation mechanism which catches the LAA trabeculations using its eight claws1. This potentially allows LAmbre to occlude a large LAA with an ostium up to 40 mm, i.e., the size of the largest cover. This study aimed to evaluate procedural and short-term outcomes of the LAmbre device in occluding large LAA.

We retrospectively analysed consecutive patients who underwent LAAO at three centres in Hong Kong and China (Prince of Wales Hospital, Hong Kong; Shanghai Tenth Hospital, Shanghai; Ningbo First Hospital, Ningbo) from June 2009 to June 2018 to identify LAmbre implantations for large LAA. A large LAA was defined as having a maximal ostium diameter ≥31 mm based on the larger dimension obtained by core lab analysis (Prince of Wales Hospital) of the intra-procedure cine angiogram and transoesophageal echocardiogram (TEE). Patients with no images for core lab analysis or in whom the devices used were not commercially available were excluded. Device success was defined as successful device implantation without significant peri-device leak (PDL; i.e., ≤5 mm leak), detected by final angiogram or TEE (Figure 1). The primary endpoint was the device success rate and the secondary endpoints included the percentage of device-related thrombus (DRT) and significant PDL (>5 mm) at follow-up TEE, performed 1.5-6 months after implantation. 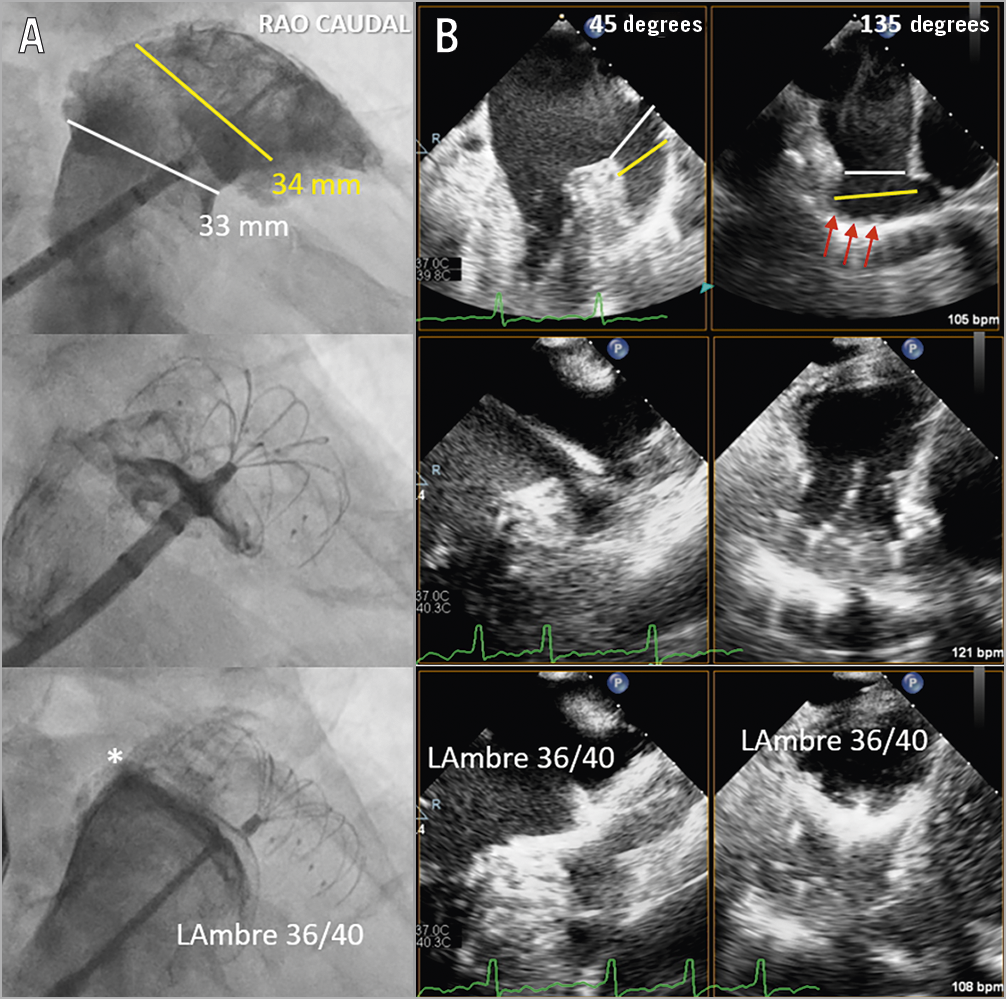 Figure 1. Implantation techniques of LAmbre in large left atrial appendages (LAA). A) Cine angiogram. B) Biplane transoesophageal echocardiogram (TEE). First, the sizes of the ostium (white lines) and the designated landing zone (yellow lines) with abundant trabeculations (red arrows) were measured to choose an optimal LAmbre umbrella and cover size for occlusion (upper panels). Second, the delivery catheter was positioned at the designated landing zone and the umbrella of the LAmbre was rolled out to catch the LAA trabeculations for anchoring (middle panels). Third, the cover of the device was unsheathed to cover the LAA ostium. Angiography ± colour TEE were performed to detect peri-device leak (* = minor leak) (lower panels).

During the study period, 964 patients underwent LAAO in the three centres. After core lab adjudication, 27 patients were included in the final analysis (Table 1). 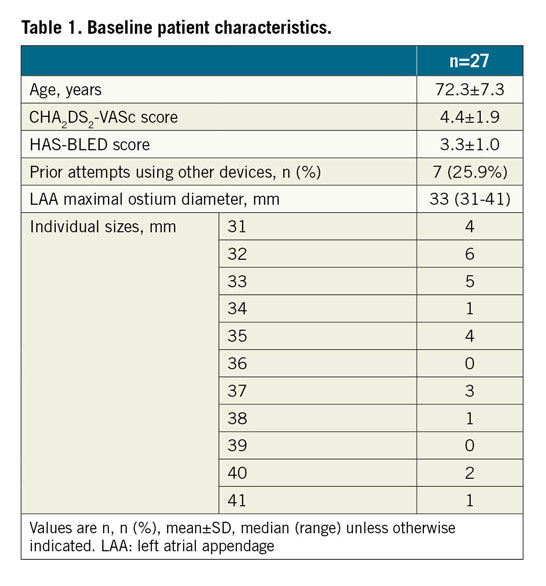 LAmbre implantations were performed under TEE guidance in 66.7%, and under fluoroscopic guidance alone2 in 33.3% of patients. The median LAA maximum ostium diameter was 33 mm (range: 31-41 mm). The device success rate was 89.9% (Table 2). The 36/40 (umbrella/cover) device was used most commonly (41.7%). Misalignment of the device cover with the LAA ostium was seen in all three failed cases (Figure 2). There were two cases (6.7%) of coronary air embolism during the procedure; otherwise, there was no cardiac tamponade, device embolisation or 30-day mortality. Follow-up TEE was completed in 95.8% of patients. There was one (4.3%) DRT and no significant PDL (>5 mm). Minor PDL was seen in 30.4% of patients (Table 2). At 30 days, one patient (4.2%) developed ischaemic stroke. The patient, who was diagnosed as having lung carcinoma two weeks after LAAO, self-stopped antiplatelets, refused TEE and developed a stroke one week later. 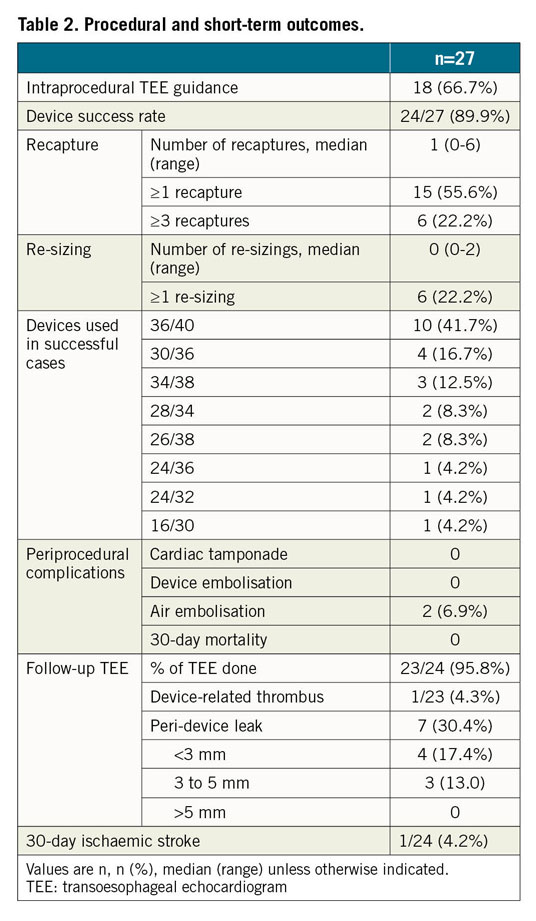 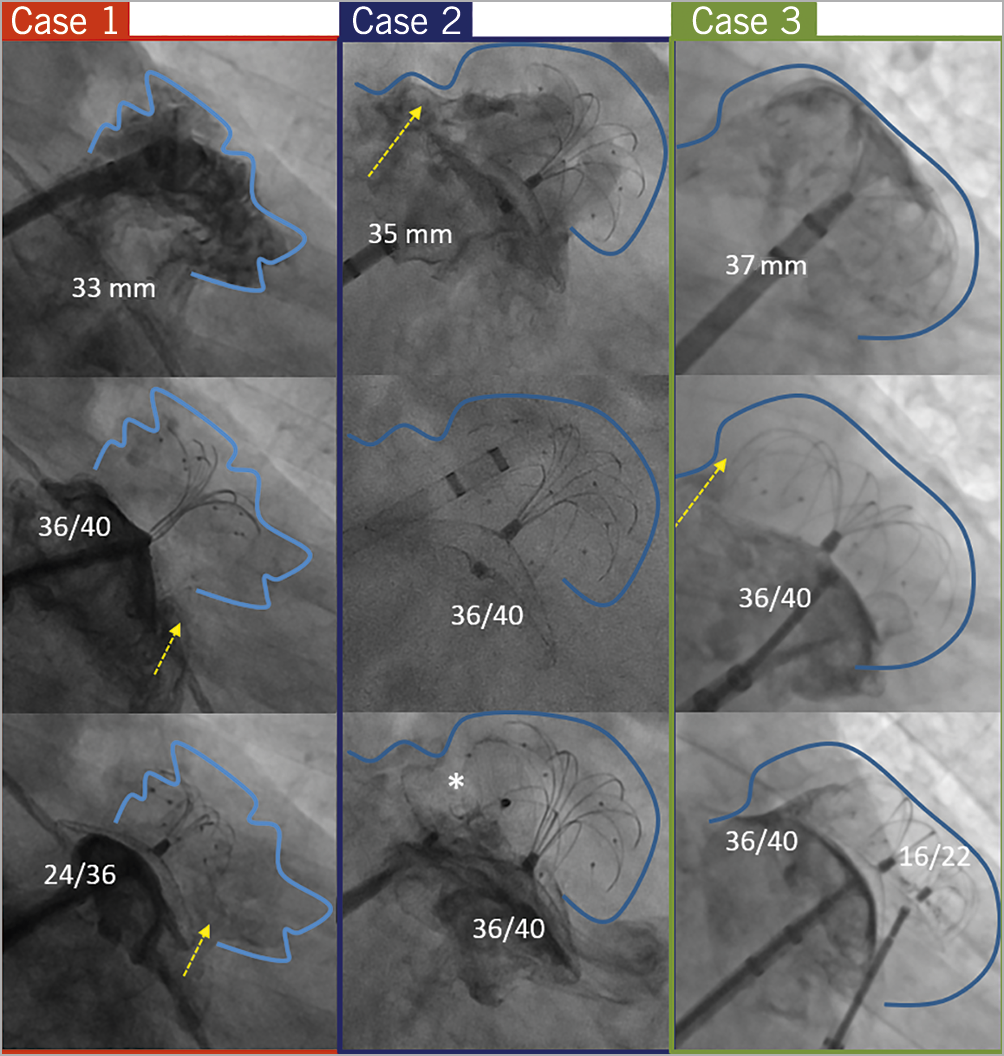 The principal finding of this study is that the LAmbre device was feasible and safe in occluding large LAA with an ostium ≥31 mm. This study is the first and largest reported series of endovascular closure of large LAA using a single device. Importantly, there was no device embolisation, supporting the safety of the device’s unique additional anchor mechanism. However, the common failure mechanism suggested that alignment of the LAmbre cover with the LAA ostium might not always be possible, being limited by the transseptal site and LAA morphology. Furthermore, minor PDL (30.4%) was not uncommonly seen. This could be related to the large LAA occluded and the adoption of fluoroscopy guidance alone in 33.3% of the procedures. Air embolism was not reported in another LAmbre study3 and a 10 Fr delivery sheath was used even in large devices, which theoretically would not increase the risk of air embolism. Therefore, we believe that the two cases of air embolism were more likely coincidence.

First, this study was a retrospective registry with a limited sample size. Second, a large LAA was classified based on an LAA angiogram alone in 33.3% of cases. Third, the majority of cases were performed or proctored by experienced LAmbre operators, and therefore reproducibility remains uncertain. Fourth, all subjects included were Asians, who might have a different LAA anatomy from Caucasians4.

LAmbre devices appeared feasible and safe in occluding large LAA with a maximal ostium ≥31 mm. Long-term data on their efficacy in stroke prophylaxis are needed.