Stent underexpansion is associated with increased risk of in-stent thrombosis and restenosis. Several management options exist beyond high-pressure non-compliant balloon post-dilation; however, there is no consensus on the best approach.

Excimer laser (EL) causes a thermo-mechanical process of expanding and imploding vapour bubbles and has been used for lesion modification1,2. Injection of iodinated contrast during higher power laser activation has been shown to amplify ablative effects, including outside the stented lumen. This “off-label” use enables modification of calcified external disease without ablating stent metal and can facilitate subsequent stent expansion3,4. The outcomes and efficacy of this strategy, however, remain incompletely understood.

This was a retrospective single-centre study of consecutive patients who underwent EL with concurrent contrast injection (ELCA-con) at the Mayo Clinic, Rochester (MN, USA), for stent underexpansion from January 2014 to July 2019. The study was approved by the Mayo Foundation Institutional Review Board. Medical records and angiograms were reviewed for clinical and procedural variables, complications, and early and late clinical outcomes.

Upon decision to proceed with ELCA-con, a 0.9 mm X80 fibre with the CVX-300® cardiovascular laser excimer system (Spectranetics Corp., Colorado Springs, CO, USA) was calibrated and employed following standard safety precautions. The system was advanced over the 0.014-inch coronary guidewire to the underexpanded stent. Settings of pulse frequency of 80 Hz and fluency of 80 mJ/mm² were used with manual contrast injection during EL activation (Figure 1). Passes were performed with five seconds of laser activation followed by a 10-second rest period. Subsequent post-dilations were performed with non-compliant balloons, with or without additional stent placement. 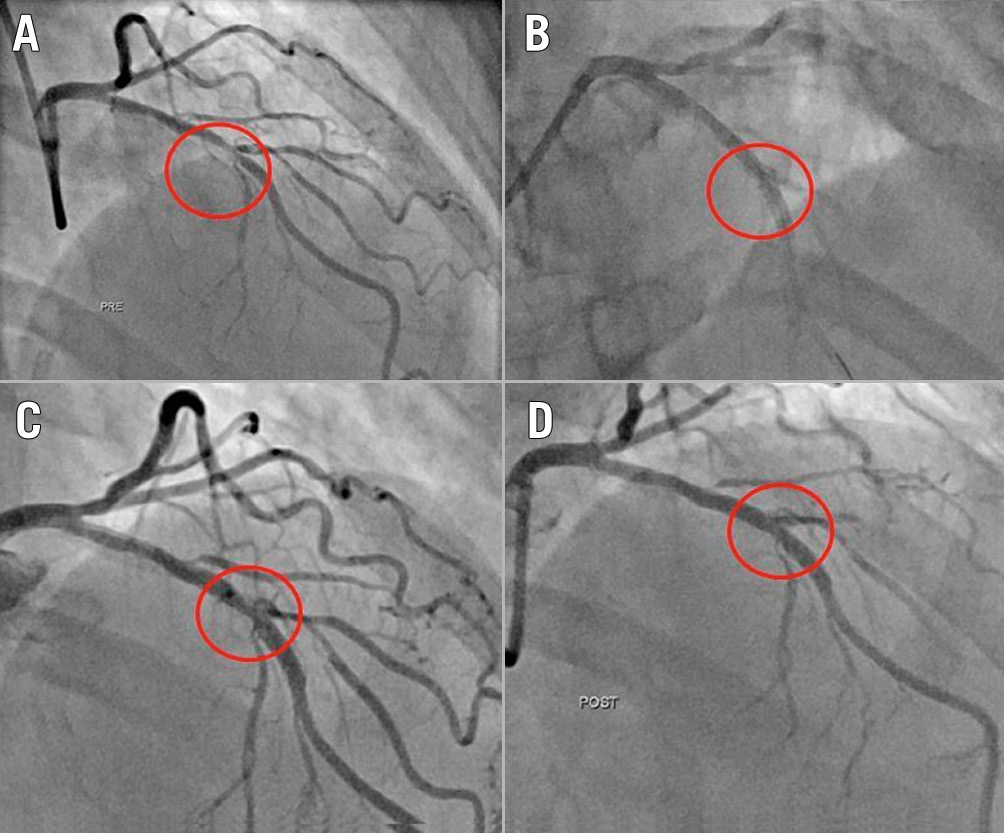 Figure 1. Example of successful ELCA-con assisted PCI.  Baseline LAD lesion (A), with acute stent underexpansion (B) of 42% after post-dilation. After ELCA-con (C), the stent was able to be post-dilated successfully (D).

Twenty-six patients underwent ELCA-con assisted PCI for underexpanded stents during the study period. Clinical and procedural variables are shown in Table 1. All lesions demonstrated calcification by fluoroscopy. Mean percent underexpansion was 77±16%. ELCA-con improved stent expansion in all patients, with 58% of patients achieving ≤20% residual stenosis. Twenty-seven percent of patients achieved a relative improvement in stent underexpansion of ≥80%, as previously defined (Table 2). 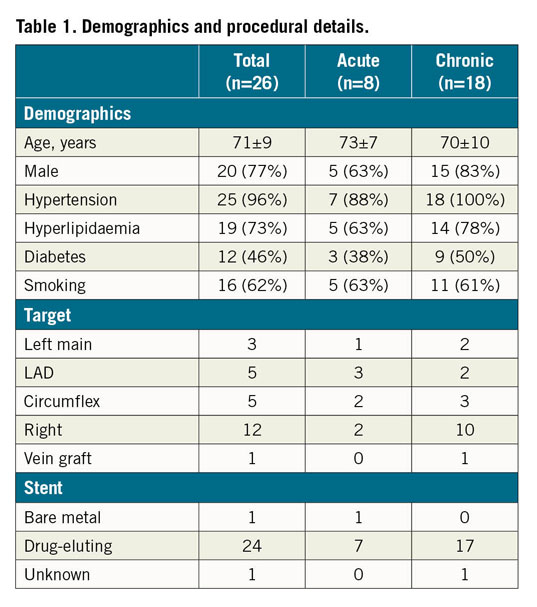 Procedural complications occurred in four patients (15%). These included one acute perforation of the left anterior descending coronary artery occurring after eight passes of ELCA-con and a single high-pressure post-dilation. This was successfully managed with placement of a covered stent. Distal embolisation (n=1) and slow flow (n=2) were noted in three patients. There were no in-hospital deaths, strokes, or repeat revascularisations.

Upon follow-up of median (interquartile range) 13 (3-34) months, there were 4 deaths (15%). One patient died from pulmonary embolism one year after ELCA-con, 2 died from valvular disease, and 1 died after out-of-hospital sudden cardiac arrest two days after unsuccessful planned staged PCI of the left circumflex artery (unable to cross), which was performed two weeks after uncomplicated successful ELCA-con in the right coronary artery. One patient suffered a non-fatal stroke 30 months after ELCA-con. One target lesion revascularisation (3.8%) was observed, requiring bypass surgery for recurrent restenosis nine months after ELCA-con for a drug-eluting stent placed to the right coronary artery seven months earlier, which had resulted in minor improvement in stent expansion (from 70% to 56%).

Among the 8 patients who underwent ELCA-con assisted PCI for acute underexpansion (mean stenosis 69±18%), 5 resulted in ≤20% residual stenosis. The relative improvement in acute underexpansion was ≥80% in 3 patients. One patient suffered the previously described coronary perforation. No other complications were noted. Follow-up revealed that one of the deaths was from valvular disease. No other adverse events were noted.

This study showed that ELCA-con may be a reasonable option for management of stent underexpansion. However, despite improved stent expansion in all cases, complete expansion was not frequent, with more than 40% of patients having ≥20% residual stenosis. More importantly, acute serious complications were not rare, underscoring the imperfect nature of this therapy.

Latib and colleagues established this technique and analysed 28 patients receiving ELCA-con for stent underexpansion, using a variety of EL catheters with variable energy settings, and follow-up of six months. Three of these cases were acute ELCA-con, though these were not analysed separately3. Veerasamy and colleagues described 19 patients who underwent EL for stent underexpansion with 13 acute cases; however, contrast amplification was used in only 9 patients, and underexpansion severity was estimated visually rather than by QCA1. Our study adds to the body of knowledge through consistent use of maximal EL settings, use of contrast amplification in all cases, QCA analysis, and longer follow-up. Case selection remains an important consideration and may, in part, explain why our study showed less impressive improvement in stent expansion than other studies. The observation that success rates may be better in acute versus chronic underexpansion makes sense when considering the different clinical scenarios, but this should be tempered by the small sample size.

Additionally, this underscores the importance of adequate lesion assessment and preparation prior to stent placement, thereby avoiding the need to employ post-stent strategies. Moving forward, intracoronary imaging to understand the mechanisms of underexpansion (e.g., arc, depth and length of calcification) should play a key role in selection of EL, lithotripsy, atherectomy, and high-pressure balloon, among others, in tailoring therapy.

This was a retrospective single-centre study which limits its generalisability. Selection bias, sample size, and operator preferences are additional limitations to consider in interpretation of the findings.

This study demonstrates that ELCA-con has a place in the armamentarium in treating stent underexpansion but is not a panacea. Additionally, the findings support continued study to mitigate complications and continued evaluation of alternative strategies, including intravascular lithotripsy, ultra-high-pressure balloons, and more.