Aims: Long-term clinical outcome data for second-generation drug-eluting stents (DES) are critical for the assessment of safety and efficacy. Five-year results from the RESOLUTE China Registry are presented in this report.

Methods and results: The RESOLUTE China Registry is a prospective, multicentre, observational study for all-comers requiring coronary stent implantation. The primary endpoint was target lesion failure (TLF) at one year, and the main secondary endpoint was definite or probable stent thrombosis at one year. Additional secondary endpoints assessed up to 5 years include rates of all deaths, target vessel myocardial infarction (TVMI) and target lesion revascularisation (TLR). A total of 1,800 patients were enrolled from December 2010 to March 2012 at 30 sites in China and implanted with Resolute DES. At 5 years, TLF was 9.8%, TVMI 3.2%, TLR 4.6% and very late stent thrombosis 0.5%. Results of pre-specified subgroup analyses show 5-year TLF rates of 14.3% for diabetics and 13.4% for patients with chronic total occlusions.

The first drug-eluting stents (DES) were introduced in 2003 as an alternative to bare metal stents (BMS) and have demonstrated reduced risk of restenosis in percutaneous coronary interventions (PCI) compared to BMS, balloon angioplasty and vascular brachytherapy1,2. Design iterations have produced “second-generation” DES to improve deliverability and biocompatibility and thus lessen the inflammatory response after intervention. Several studies have reported an improved safety profile with second-generation DES compared to first-generation DES and BMS3,4. The second-generation Resolute™ and Resolute Integrity™ DES (Medtronic, Minneapolis, MN, USA) have been studied in multiple prospective clinical studies with over 7,600 patients enrolled worldwide in the RESOLUTE Global Clinical Program. Long-term follow-up data on DES patients are important to illustrate the continued safety and efficacy of the intervention. Five-year clinical outcomes have been published from several studies in the RESOLUTE Global Clinical Program5,6, but more long-term outcome data are needed specifically for the Asian population. The current report presents 5-year clinical outcomes for the RESOLUTE China Registry (R-China Registry).

The study design of the R-China Registry has been reported previously7,8. Briefly, the R-China Registry is a prospective, multicentre, observational study in an all-comers Chinese population. Patients were 18 years or older and acceptable candidates for PCI, with minimal exclusion criteria. After implantation with Resolute DES, patients were followed at 30 days, 6 months, and annually to 5 years by office visit or phone call. At each follow-up, data on adverse events and dual antiplatelet therapy (DAPT) usage were collected. The trial complies with the Declaration of Helsinki, local ethics committees approved the clinical protocol at each enrolling centre, and informed consent was obtained from all patients.

Study oversight was provided by the steering committee comprised of physician investigators and sponsor representatives. Safety oversight was provided by an independent data safety monitoring board. Outcomes were adjudicated by a clinical events committee of cardiologists not participating in the clinical study. Monitoring by R&G Pharma Studies (Shanghai, China) was conducted at all study centres to verify source data from at least half of all enrolled patients, and the source was verified for all serious adverse events.

All analyses were conducted based on the intention to treat; no data imputation for missing values was performed. Nominal variables are presented as percentages and continuous variables as mean±standard deviation. The counts and percentages of clinical events are presented in table format and the incidence of clinical events is presented using the Kaplan-Meier method in figure format. Statistical analyses were performed using SAS software, version 9.1 or later (SAS Institute, Cary, NC, USA).

From December 2010 to March 2012, 1,800 patients were enrolled in the R-China Registry at 30 clinical study centres in China. Baseline and procedural characteristics have been reported previously and are shown in Table 1 and Table 2,7,8. Percentages of patients with various comorbidities or lesion/procedural complexity are included in Table 3. There were 61% complex patients, 29% of patients with a history of diabetes, 68% with long lesions and 43% with small vessels. DAPT usage for the R-China Registry was 39%, 36% and 35% at 3, 4, and 5 years post procedure, respectively (Figure 1). The rate of reported significant bleeding events at 5 years was 2.2%. The follow-up visit compliance rate for 5-year follow-up was 88.1%. 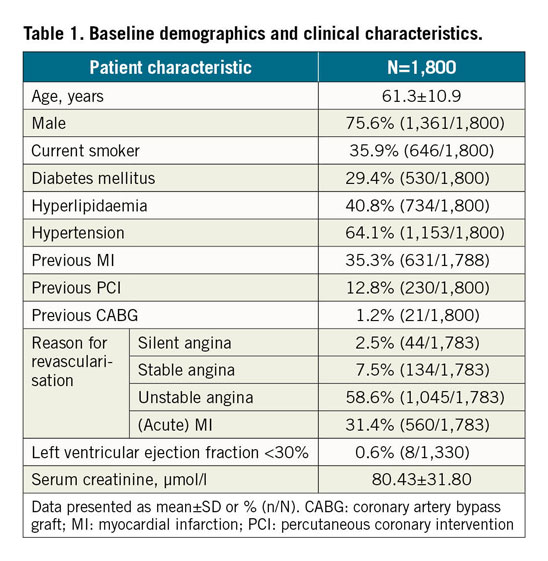 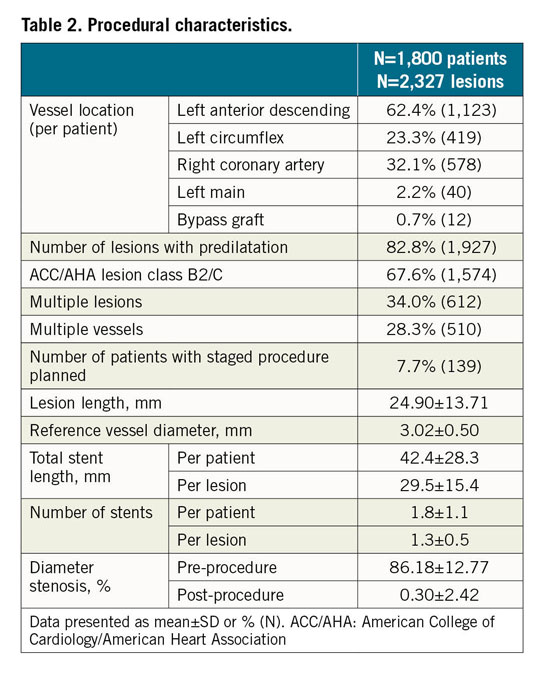 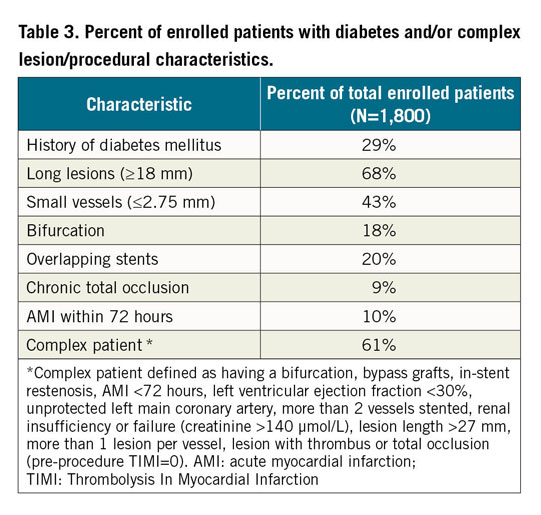 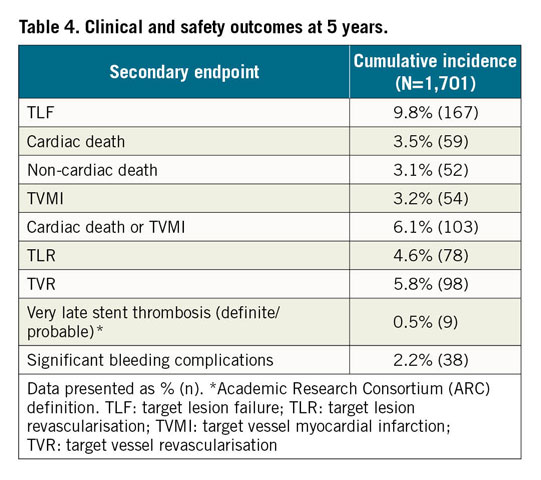 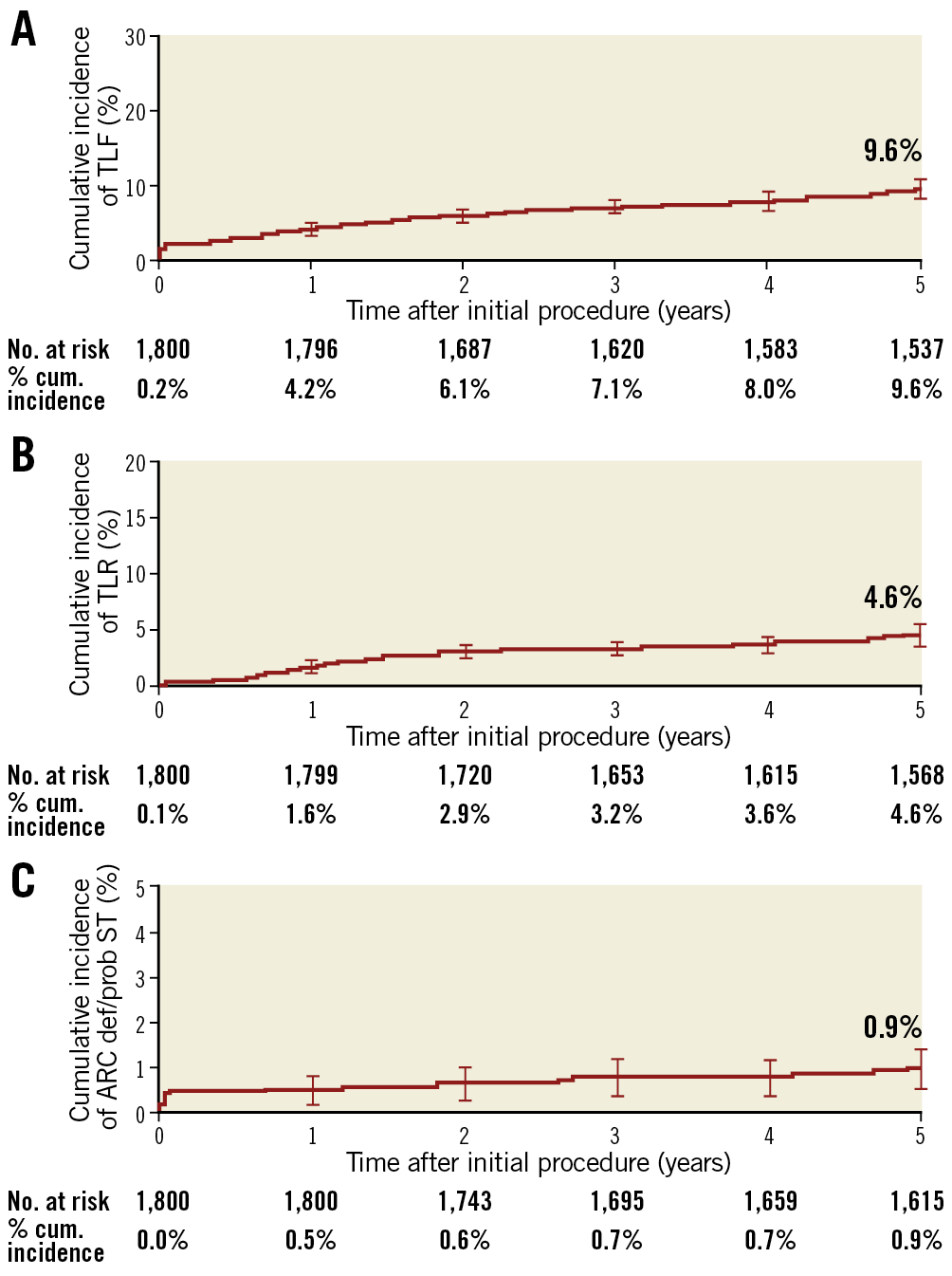 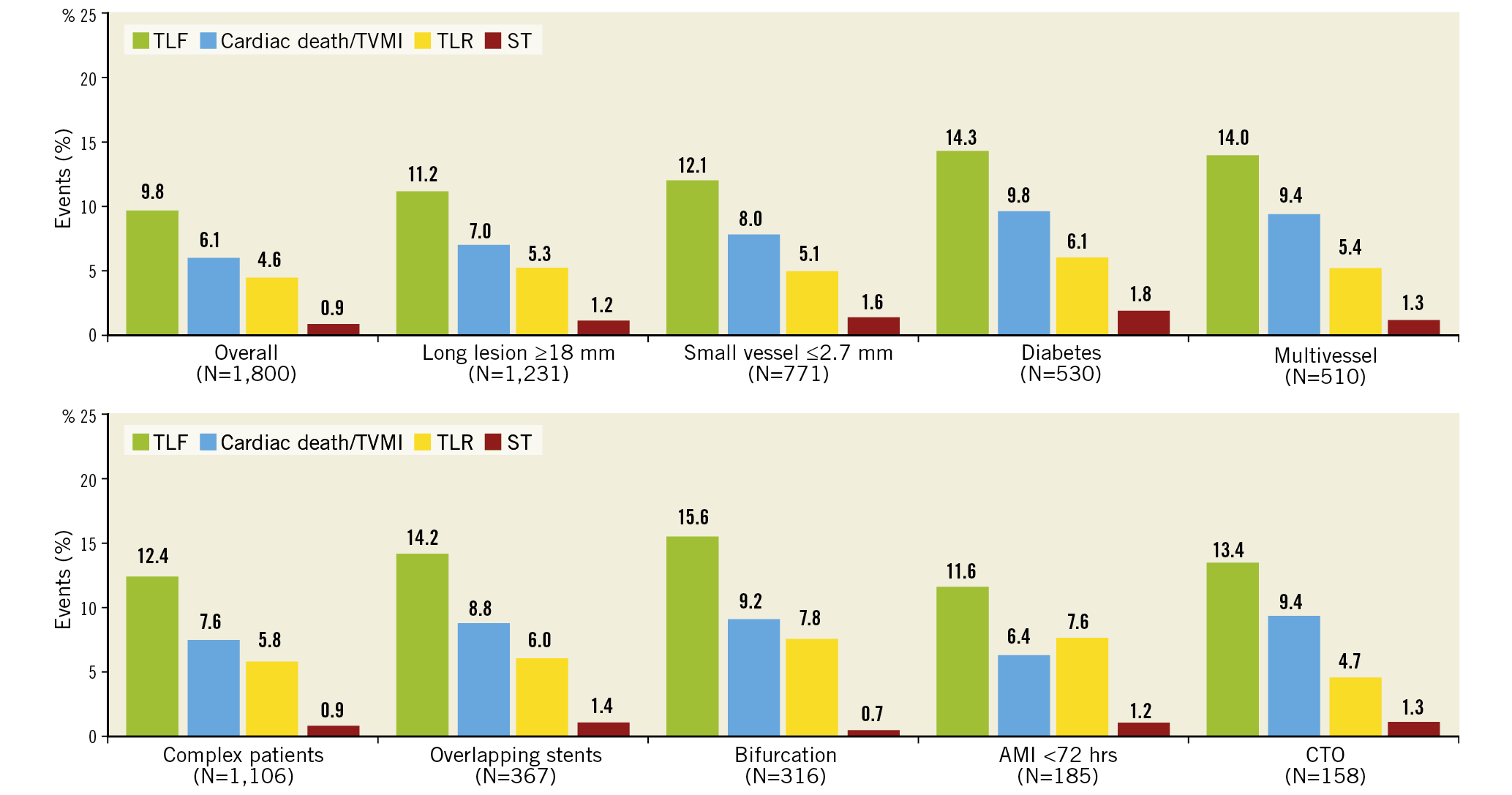 Results at 5 years in the R-China Registry include low rates of TLF and other secondary endpoints in a trial where 61% of patients were complex, illustrating the robust safety and efficacy profile of Resolute DES in this all-comers Chinese population.

Other DES trials to report 5-year clinical outcomes include COMPARE II10, SPIRIT III11 and TWENTE12. The rates of 5-year TLF were 13.4% (biolimus-eluting stents [BES]) vs 11.5% (everolimus-eluting stents [EES]) for COMPARE II, 12.7% (EES) vs 19.0% (paclitaxel-eluting stents [PES]) for SPIRIT III and 15.0% (Resolute DES) vs 16.2% (EES) for TWENTE10,11,12. These 5-year TLF rates are all higher than the TLF rate in the R-China Registry (9.8%), driven by a low TLR rate of 4.6%. As the R-China Registry was an all-comers registry, patient selection bias and lack of mandated angiographic follow-up could have influenced the TLR rate; however, long-term outcome data after PCI in the Chinese population are limited, so this is speculative.

The TLF rate for the R-China Registry compared to other Resolute clinical studies with 5-year follow-up was similar to the TLF rate of 10.3% for Resolute patients in the R-China randomised controlled trial (RCT) but less than the rate of 17.1% for Resolute patients in the RESOLUTE-III All-comers (RAC) trial (Figure 4). There was a higher proportion of complex patients in RAC compared to the R-China Registry (67% vs 61%, respectively), which could have contributed to the difference in TLF rates. The TLF rate reported for pooled Resolute trial data was midway between these rates at 13.4%6. The TLF rate for RESOLUTE Japan, included in the pooled analysis of Resolute studies, was also low with a rate of 5.6% at 4 years13. Reports of differences in thrombotic and thrombolytic status for Asian patients versus patients in Western countries have been postulated as reasons for differences in the underlying causes of thrombotic events14,15.

Patients with small vessels (reference vessel diameter [RVD] <2.75 mm) experienced a TLF rate of 12.1% and a TLR rate of 5.1% at 5 years, higher than for the overall cohort in the R-China Registry. Limited data exist on long-term follow-up of patients with small vessel disease after DES implantation. The PERSEUS Small Vessel trial reported a high TLF rate of 20.1% and a TLR rate of 13.6% at 5 years for lesions of RVD between 2.25 and 2.75 mm16. Historically, PCI in small vessels has resulted in an increase in adverse events17. However, several recent studies have reported no differences in clinical outcomes or angiographic measurements for small (RVD ≤2.5 mm) compared to non-small vessels after DES implantation, including no association of increased major adverse cardiac events (MACE) or TVR at 1 year18, no difference in early or late restenosis at 8 months19, and no difference in TLR at 2 years20 for treatment in small vessels. Notably, favourable short-term outcomes were reported for a subsequent iteration of the R-ZES, the Resolute Onyx™ ZES (Medtronic), for patients with very small (RVD <2.25 mm) lesions: 5.0% TLF and 2.0% TLR at 1 year21, suggesting that advances in stent technology may ameliorate the performance of DES in small vessels after PCI.

DAPT usage has varied widely across Resolute clinical studies (Figure 1), ranging from 11% to 62.5% at 5 years. DAPT prescription rates were generally higher in the US and Japanese trials (R-38, R-Japan SVS and RUS), whereas, in the European-based RAC trial, DAPT prescription was lowest despite relatively high lesion and patient complexity. DAPT usage in the R-China Registry was 35% at 5 years and bleeding events were rare (2.2%). While European Society of Cardiology and American College of Cardiology/American Heart Association guidelines recommend at least 6 months DAPT for newer-generation DES in stable patients without high bleeding risk, there is limited consensus for the optimal duration of DAPT in patients with high bleeding risk after PCI24,25. Recent and ongoing studies are being conducted to evaluate the potential of shortened (1-month) DAPT in high bleeding risk patients26,27,28. The rate of definite/probable stent thrombosis in the R-China Registry was 0.5% at 5 years and similar to rates in other published studies5,6,10,11,12.

As in other registries, there was no control group in this trial. Intravascular ultrasound and optical coherence tomography data were not collected since these imaging procedures were not in common practice in China when the study was enrolling patients. Although not all patient data were monitored in the R-China Registry, an analysis at one year found no difference in outcomes between monitored and unmonitored patients7. Subgroup analyses were pre-specified, but randomised trials are needed to confirm the findings. Results from this study may be specific to China and may not necessarily be indicative of outcomes in other Asian or Western countries.

The RESOLUTE China Registry (ClinicalTrials.gov NCT01243749) was funded by Medtronic.

B. Ferri and M. Liu are employees of Medtronic. The other authors have no conflicts of interest to declare.