The anatomical SYNTAX score (SS) has been considered an important tool in the quantitative assessment of the complexity of coronary artery disease (CAD) and in facilitating the risk stratification of patients undergoing revascularisation. However, the anatomical SS, obtained prior to revascularisation, has been shown not to be associated with short- and long-term clinical outcomes in patients who received coronary artery bypass grafting (CABG). These findings prompted the development of the CABG SS, assessing native residual stenotic lesions, taking into account the extent of revascularisation by bypass grafting, with the aim of helping to identify patients at higher risk of future adverse events. The primary report about the CABG SS, assessed at 15 months after surgical revascularisation in 115 patients enrolled in the SYNTAX-LE MANS substudy, demonstrated the feasibility (98.3%, n=113) and reproducibility of the score1, and evaluated clinical outcomes up to five years.

The SYNTAX Extended Survival (SYNTAXES) trial has recently reported vital status up to 10 years in patients enrolled in the original SYNTAX trial2. The aim of this study is therefore to update our previous findings concerning the impact of the CABG SS on 10-year all-cause death in patients with previous CABG. 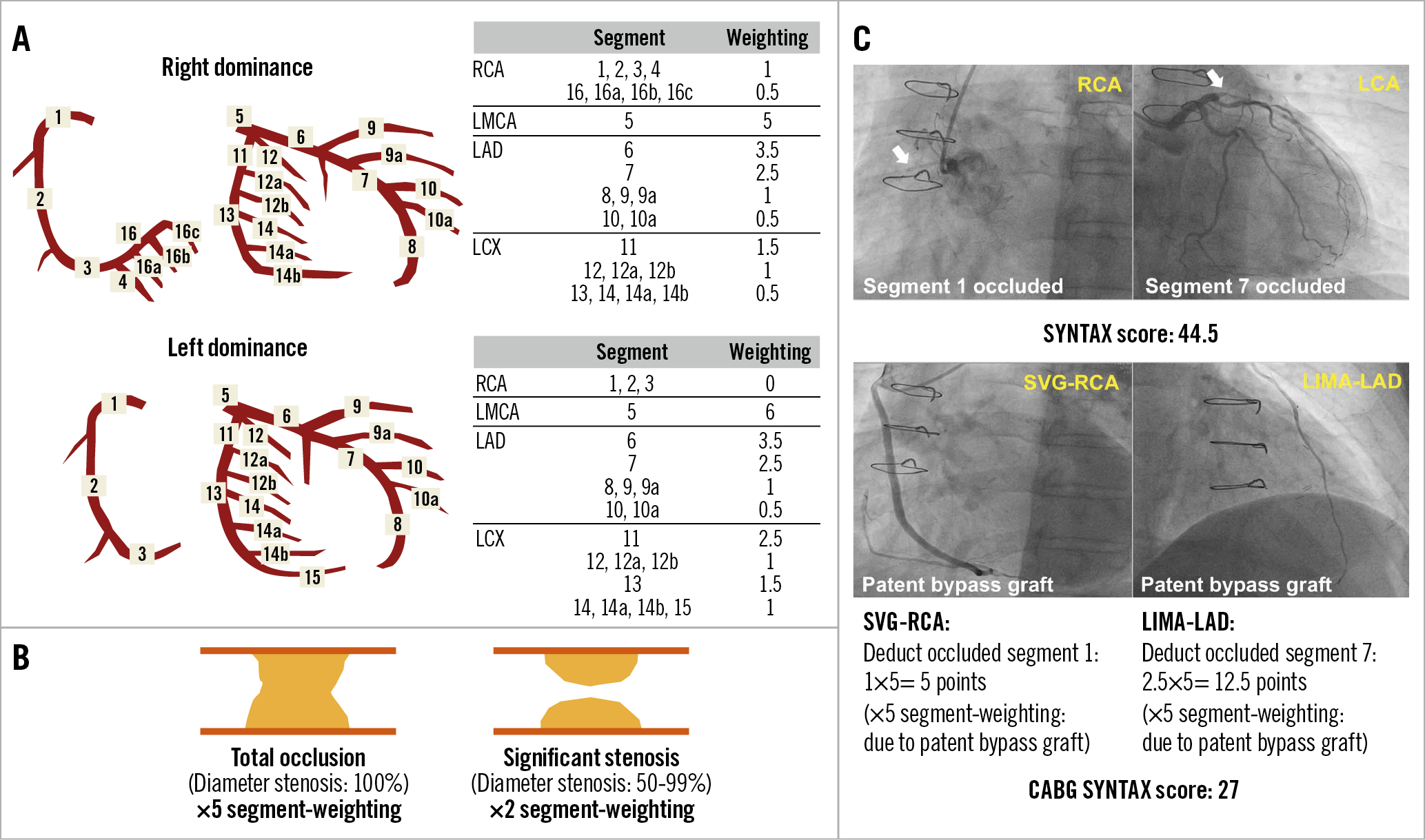 Vital status at 10-year follow-up was complete in 110 (97.3%) patients. The median duration of follow-up was 11.3 years (interquartile range: 10.1-12.0) overall, 11.3 years (10.5-11.9) in the low CABG SS group, and 11.4 years (7.3-12.0) in the high CABG SS group. Baseline characteristics according to the CABG SS are summarised in Supplementary Table 1. Medication status is presented in Supplementary Table 2. Although clinical characteristics were comparable between the low and high CABG SS groups, the high CABG SS group had more complex CAD with a higher anatomical SS, resulting in a lower rate of complete revascularisation. A representative case of the CABG SS is shown in Figure 1.

Figure 2. All-cause death according to the CABG SYNTAX score subdivided into low and high score groups by the median. A) At 10 years. B) At maximum follow-up.

The CABG SS has been proposed for objective quantification of the residual disease and level of revascularisation in patients with previous CABG and thereby to help identify patients at higher risk of future adverse events1. The present study demonstrated that the CABG SS was possibly helpful: it identified patients with a more than threefold increase in mortality among those with prior CABG.

To improve clinical outcomes in patients with previous CABG, optimal medical therapy (OMT) is of paramount importance to mitigate disease progression in both the native coronary artery and bypass graft, given that the use of OMT was achieved infrequently in patients who underwent CABG compared to those with PCI3. The CABG SS might potentially help to identify patients in whom a more aggressive risk factor control with OMT could maximise its benefit.

Despite these secondary prevention therapies after revascularisation, patients with previous CABG sometimes undergo repeat revascularisation in the long term due to late graft failure and atherosclerotic progression of native coronary arteries. For instance, saphenous vein grafts (SVGs) have been shown to be protective in the first seven years, while, beyond that time, mortality increases significantly as SVGs lose their patency in patients who have received CABG4. In such cases, they are usually referred for PCI because of concomitant comorbidities and re-operative risks. A recent retrospective study demonstrated the prognostic value of the CABG SS in patients with prior CABG5. Additionally, an incremental prognostic benefit of the post-PCI CABG SS over the sole CABG SS in patients with previous CABG who underwent PCI was observed as attested by net reclassification improvement of 0.306 for all-cause death at five years5. These findings suggest a prognostic utility of the CABG SS in patients with previous CABG in the long term.

In addition to the post hoc nature of the present study, the pre-specified sample size was limited in this analysis. The SYNTAX-LE MANS substudy mandated a 15-month coronary angiogram by protocol, so that the CABG SS was calculated at 15 months after the surgical procedure. In addition, the score does not take into account the type of graft anastomosed and the characteristics of the graft disease. Thus, prospective, large-scale investigations are warranted to evaluate the value of the CABG SS in the long term.

The present study assessed 10-year all-cause death according to the CABG SS in patients with prior CABG, showing a numerically higher risk of all-cause death in the high versus low CABG SS groups.

The SYNTAXES study was supported by the German Heart Research Foundation (Frankfurt am Main, Germany).