Aims: The aim of the study was to report the clinical experience, 30-day mortality and acute outcomes of patients undergoing transcatheter aortic valve implantation (TAVI) in the Asia Pacific region.

Methods and results: The Asia Pacific TAVI registry is an international, multicentre, prospective, observational registry managed under the auspices of the Asian Pacific Society of Interventional Cardiology (APSIC). Patients undergoing TAVI in seven centres from Hong Kong, Japan, Philippines, Singapore and Taiwan, treated with TAVI devices for severe symptomatic aortic stenosis, were assessed. This first review presents the acute results and 30-day mortality. A multivariable analysis was also performed to identify independent predictors of early all-cause mortality. The enrolment was from 2009 to 2017 and a total of 1,125 patients were recruited. The 30-day mortality rate was 2.5%. Baseline logistic EuroSCORE more than 16 was independently associated with a 2.8-times increased risk of 30-day all-cause mortality (p=0.016). Post-procedural stroke (HR 4.9, p=0.008) was also associated with increased mortality.

The Asian population is growing and nearly four billion people live in Asia. Health care in Asia has been evolving rapidly over the last few decades and is influencing the life expectancy of its population. In fact, contemporary data indicate that the ageing population in Asia is growing as much as its economy (Figure 1),1. This suggests that aortic valve stenosis rates may also increase over time. Although transcatheter aortic valve implantation (TAVI) has been demonstrated clearly to be an effective treatment in severe aortic stenosis (AS) patients at intermediate to high risk for surgical aortic valve replacement (SAVR), uptake of the TAVI procedure in Asia compared with its population is low2,3,4. This therapy, however, is anticipated to grow substantially in the coming years. The Asian Pacific Society of Interventional Cardiology (APSIC) supported the establishment of this registry to chart prospectively the outcomes and uptake of TAVI in the Asia Pacific region. 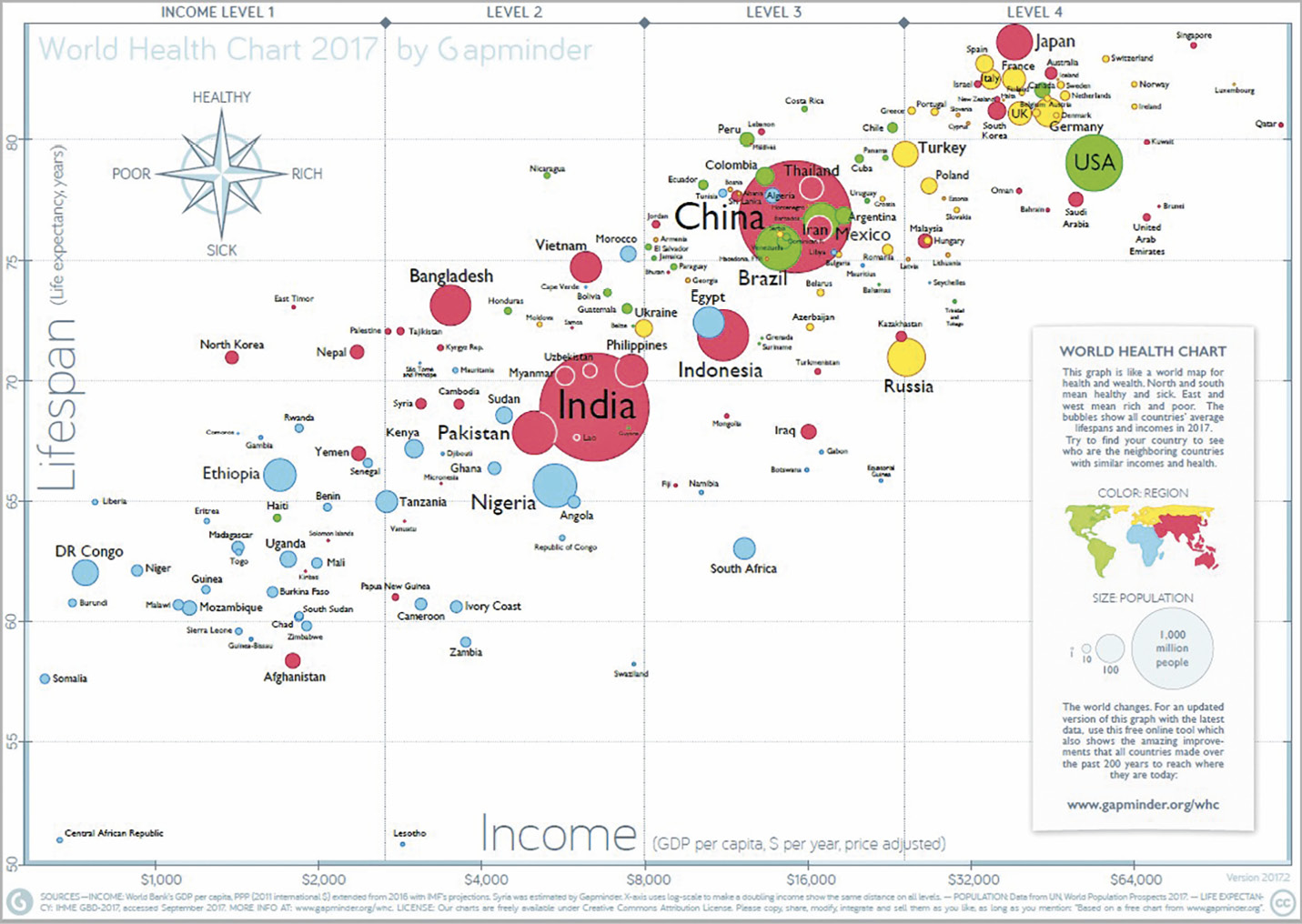 The current Asia Pacific registry includes 14 centres and recruitment is ongoing. This current analysis includes data from seven sites in Hong Kong, Japan, Philippines, Singapore and Taiwan. The procedures were carried out between 2009 and 2017. Data were collected from each study site and then sent via web-based case report forms (CRF) to the National University Heart Centre Singapore (NUHCS) Cardiovascular Research Institute for collation and analysis. The ethics committees of the participating centres approved data collection. At some sites, patients’ informed consents were collected. Patient selection, procedure protocol and post-procedural care were performed according to local practice.

Preoperative baseline and outcome data were collected based on a uniform reporting template (CRF) and standardised definitions.

Postoperative outcomes were defined according to the updated Valve Academic Research Consortium (VARC-2) definitions5. The 30-day postoperative mortality is defined as all deaths that occurred within 30 days from the procedure.

The echocardiographic measurements were carried out according to the American Society of Echocardiography (ASE) guidelines6,7.

Data are presented as frequency/percentages and mean±standard deviation, depending on the nature of the data. Confirmatory ana-ly-sis of 30-day mortality was performed with logistic regression in the context of a generalised structural equation model (gSEM). The advantage of using the gSEM framework was that both ana-ly-ses could be performed in one single framework. A backward elimination procedure (removal p>0.05) was also incorporated for model selection. Analyses were performed using Stata MP version 14 (StataCorp, College Station, TX, USA); all statistical tests were conducted at a 5% level of significance. 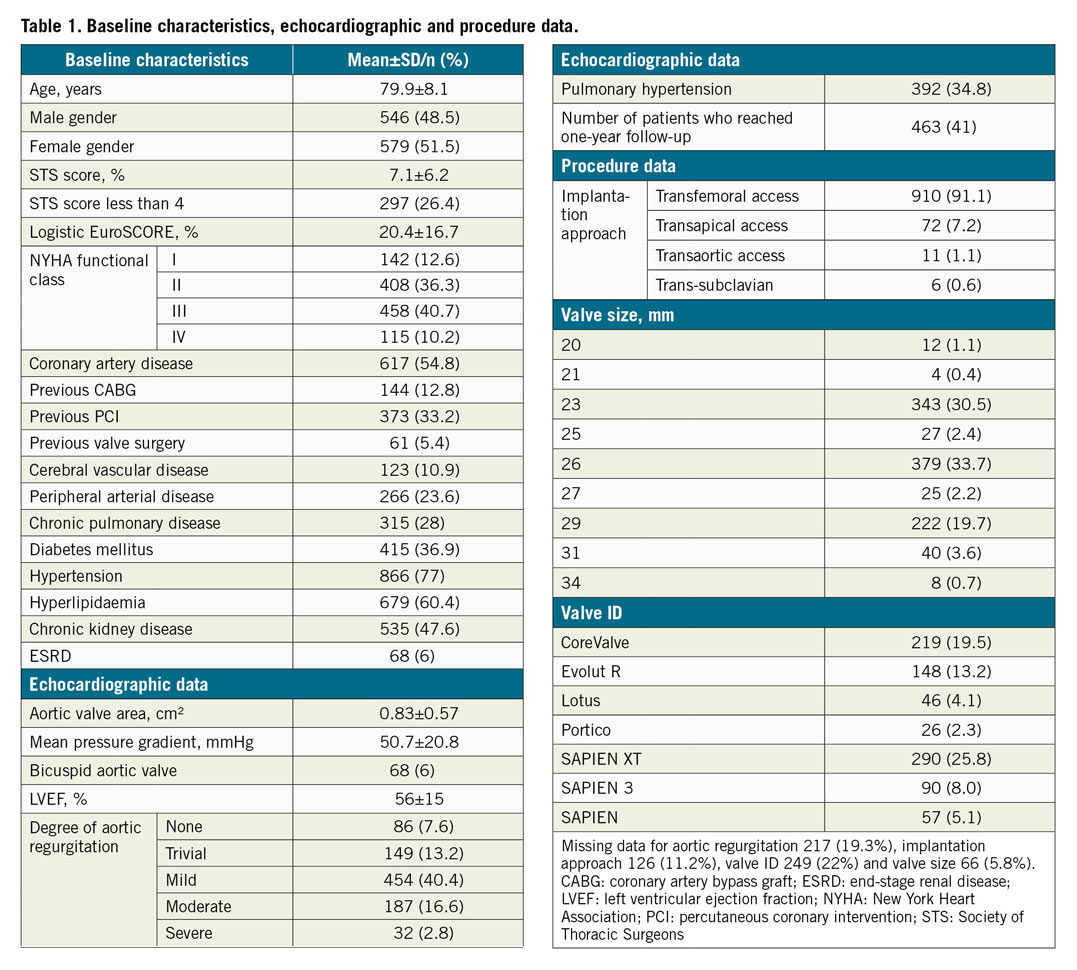 All the patients underwent preoperative echocardiographic examination and baseline data were collected. The mean baseline transaortic gradient was 50.7±20.8 mmHg and the aortic valve area 0.83±0.57 cm2. There were 32 patients (2.8%) with concomitant severe aortic regurgitation and 68 patients (6%) had a bicuspid aortic valve. The mean left ventricular ejection fraction (LVEF) was 50.7±15% and a significant percentage (34.8%) had pulmonary hypertension based on echocardiographic measurement of pulmonary artery systolic pressure (PASP). Preoperative baseline echocardiographic data are listed in Table 1.

The access routes included transfemoral, 910 (80.9%), transaortic, 11 (1%) and trans-subclavian, 6 (0.5%). The remaining 72 (6.4%) were performed via the transapical access. The most common valve platform used was the balloon-expandable valve and the most commonly used valve size was 26 mm. The post-procedure mean transaortic pressure gradient was 10.7±7.0 mmHg, while the mean post-procedure aortic valve area improved significantly (1.7±0.4 cm2). In this registry, 70.5% received first-generation TAVI devices and 29.5% received later-generation TAVI devices. The 30-day mortality rate of first-generation devices was 3.5% and that of later-generation devices was 1.1%.

All cause 30-day mortality was 2.5%. The causes of 30-day mortality are listed in Figure 2. The most common cause of death was cardiovascular (71.4%). The majority of the patients (68%) had a history of ischaemic heart disease, and 32% had a history of cerebrovascular accident. Based on the postoperative echocardiography, 17% of patients had moderate paravalvular regurgitation and 7% had mild paravalvular regurgitation. Based on the timeline, we also arbitrarily divided mortality outcomes into two groups, TAVI before 2014 and TAVI after 2014. The 30-day mortality before 2014 was 4.7% and it improved to 1.9% after 2014. 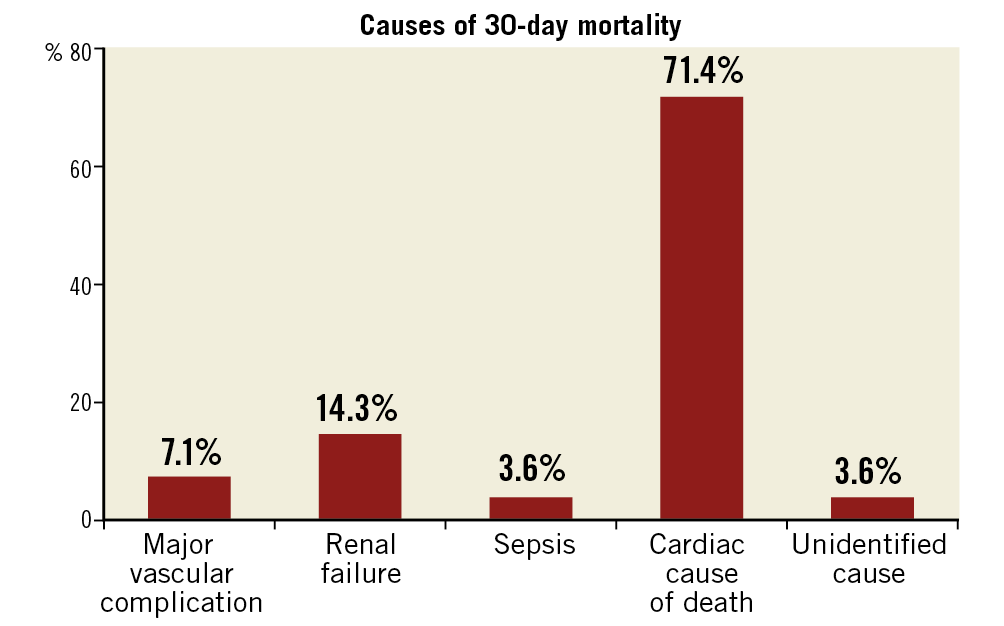 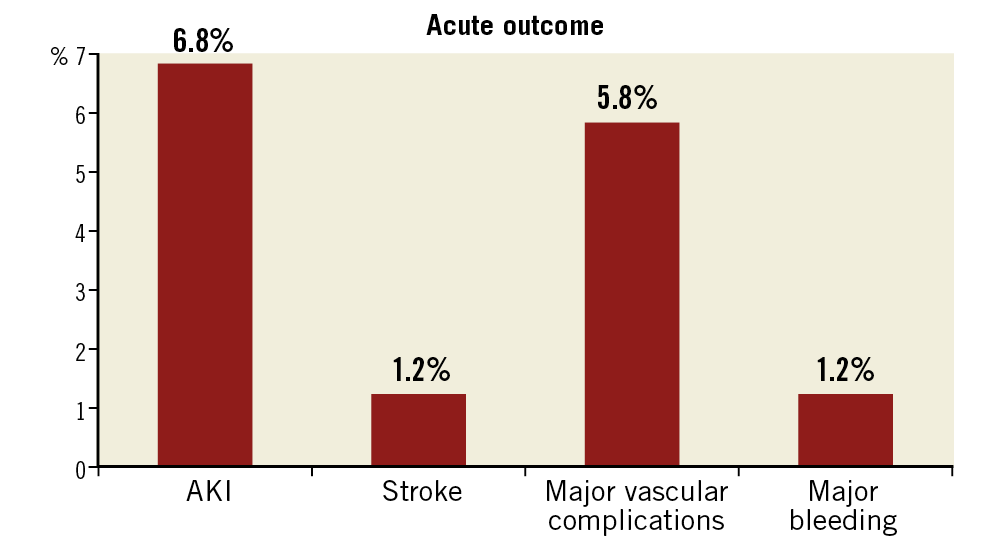 The one-year all-cause mortality rate among the post-TAVI patients was 8.8%.

This is the first report of the APSIC-sponsored TAVI registry. In summary, we found that acute procedural success in this intermediate to high surgical risk cohort was good. There were reasonably low mortality rates and acceptable complication rates. Importantly, it demonstrated that both the logistic EuroSCORE and STS scores were independent predictors of mortality pre procedure, while cerebrovascular events were independent procedure-related predictors of morbidity and mortality. In this registry, the majority of the patients were female. Even though there have been concerns about the small annulus size in the Asian population, in this registry more than 65% of patients required valve sizes of 26 mm or larger. In this registry, the proportion of bicuspid aortic valve patients (6%) is lower compared to other Asian sites (e.g., China TAVI registries). This may be related to the average age of this cohort of patients (mean 79 years). It is speculated that the increased number of bicuspid valve patients in the Chinese cohorts may be due to the recruitment of younger patients in their study.

COMPARISON TO OTHER PUBLISHED REGISTRIES

This registry is supported and endorsed by the APSIC. This is an important publication which cements the role that APSIC plays in promoting collaborative research.

There are currently two published Asian registries. These are the Asian TAVI registry followed by the Japanese OCEAN-TAVI registry8,9. The unique difference is that this registry will continue to recruit patients from North and also South-East Asian patients. Also, this means that collectively it includes patients who are of more heterogenous ethnicity as well as incorporating varied implant volumes and experience. The early outcomes published in this study are not significantly different from the other two Asian studies thus far. In the patients recruited in this study, mostly second-generation TAVI devices (e.g., SAPIEN XT [Edwards Lifesciences, Irvine, CA, USA] and CoreValve® [Medtronic, Minneapolis, MN, USA]) were utilised, and in only a few patients were very early generation devices utilised. There were also some third-generation devices (Evolut™ R [Medtronic], SAPIEN 3 [Edwards Lifesciences], Lotus™ [Boston Scientific, Marlborough, MA, USA]) used. The patients included were mostly intermediate- to high-risk patients. The low 30-day mortality rates should therefore be compared to more contemporary studies utilising the appropriate generation of devices. Figure 4 shows that the outcomes compare favourably to other studies with relatively similar baseline risk profiles9,10,11,12,13.

Figure 4. Comparison of outcomes across registries13.

ROLE OF THE LOGISTIC EUROSCORE OR STS SCORE

There are currently several risk scores being utilised for patients undergoing TAVI. These include the STS/American College of Cardiology (ACC) transcatheter valve therapy (TVT) mortality risk score, EuroSCORE I, EuroSCORE II, STS PROM and German AV score14. These scores serve several purposes, two of which are especially important. The first is to predict the 30-day mortality of patients undergoing surgery or TAVI and the second is the ability to compare across other studies. In this study, the traditional logistic EuroSCORE as well as the STS score were utilised to enable comparison across registries. While the logistic EuroSCORE and EuroSCORE II have been validated, with the latter being superior in Chinese patients for valve surgery or coronary artery bypass graft (CABG) surgery, these have not been validated in TAVI patients. This study showed that a logistic EuroSCORE of >16 and STS score >8 could predict mortality in this group of Asian TAVI patients. In the absence of other validated scoring systems, this may be utilised as a preprocedural predictor for contemporary practice.

Stroke in this study occurred infrequently (1.2%). It is important to point out that this refers to clinically evident stroke and site-reported stroke. Thus, the true incidence may be higher. It is well established that systematic neurological evaluation by trained neurologists may detect a higher incidence of stroke post TAVI. Despite the low incidence of stroke, the impact of stroke on 30-day mortality is striking. Prior studies have also demonstrated that stroke after TAVI can be devastating. A German study showed a fivefold increase in the 30-day mortality after post-TAVI stroke15. These results mandate that the Asia Pacific TAVI community should focus future attention on this complication. This would require a more in-depth assessment of risks for stroke and assessment of the impact of cerebral protection devices in the Asia Pacific cohort of patients.

Although standardised reporting was encouraged, techniques and choices of valve were left to the discretion of individual sites. The clinical outcomes were not independently adjudicated, and echocardiographic reporting was not evaluated by a core laboratory. This may have introduced bias into the study. However, the hard outcome of mortality is reasonably robust given that the current sites have a systematic mechanism for 30-day follow-up.

This initial report of the APSIC-supported Asia Pacific TAVI registry demonstrates that the 30-day outcomes were good. A high logistic EuroSCORE and high STS scores pre procedure, as well as post-procedure stroke are associated with increased 30-day mortality.